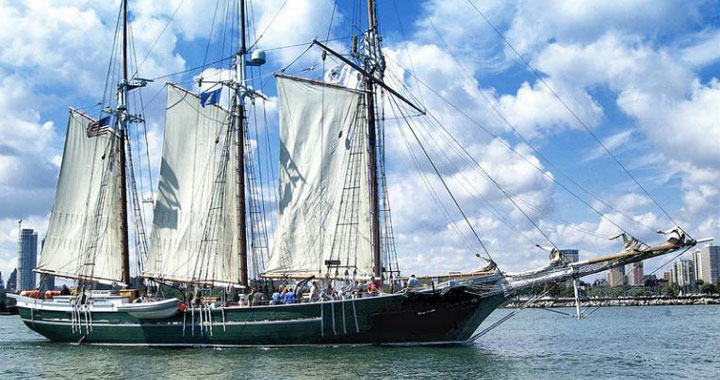 Professor Andrew Kincaid’s class took a field trip aboard the Denis Sullivan schooner on Lake Michigan in October. The field trip was part of his English 326 class, “The Development of the Novel: The Novel and the Sea.”

“In civilizations without boats, dreams dry up.” This quote from Michel Foucault’s famous essay, “Of Other Spaces,” is one of the premises upon which Professor Andrew Kincaid’s English class, “The Novel and the Sea,” is built. What dreams and nightmares emerge when we are cast adrift and become unmoored from land? What worlds appear in literature when an author launches his or her characters toward the given boundaries of geography? When Odysseus, Gulliver and Captain Kirk take a leap into the unknown, what are the psychological, economic and cultural possibilities?

Writers from Daniel Defoe (Robinson Crusoe) and Fenimore Cooper (The Pilot) to Joseph Conrad (Heart of Darkness) and Virginia Woolf (To the Lighthouse) have relied upon the ocean voyage both to push the form of the novel (think “stream of consciousness” and “modernist drift”) and to restructure its content (alienation and labor; solitude and community).

On Saturday, Oct. 7, students boarded Milwaukee’s stunning 19th-century three-masted schooner, the Denis Sullivan, in order to experience firsthand life aboard a tall ship. We learned about togetherness and diversity, knots and navigation, as well as the romance and drudgery of living life afloat.