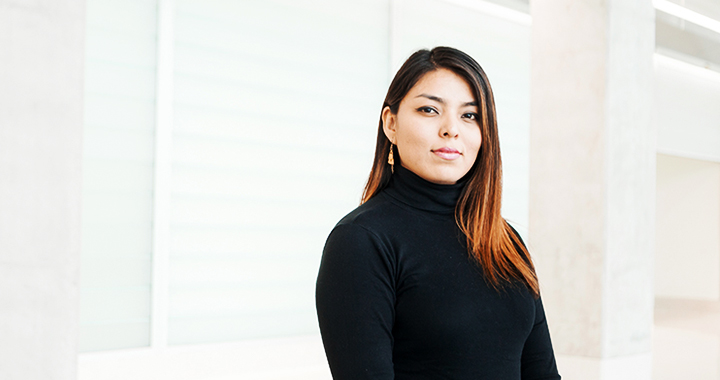 The steps that Cinthia Téllez took across the commencement stage on May 21, 2017, to accept the first college diploma in her family were so far from where her journey started that the path was sometimes hard to see.

Her road ran through soccer fields and classrooms on a quest inspired by her mother’s dream of a better life for their family. And when mounting debt brought her to a stop, the prospect of helping others like her gave her new momentum.

“When I started at UWM, I would sit in lecture halls and ask myself: ‘What am I doing here?’” Téllez said. “By my senior year, I was researching graduate schools and working with professors.”

Getting to college in the first place was an accomplishment for Téllez. Violence and economic hardship motivated her mother, Maria, to move her family from Guanajuato, Mexico, to Janesville, Wisconsin, in 2006. Téllez was 11; her brother was 7.

“I call her my ‘Wonder Woman,’” Téllez says of her mother. “She’s done a lot of different jobs — manufacturing, working in factories and fields, cleaning houses.”

Back in high school, when Téllez was juggling writing classes, soccer practice and English-language courses, her mother and a mentor inspired her to keep going and pursue her college dreams. Her mentor was one of the first Latino residents in Janesville in the 1960s. He made the transition from fieldwork to college, eventually becoming an electrical engineer for General Motors. Sharing his experiences with the Téllez family helped them understand how a college degree could improve their prospects.

Téllez enrolled at UW-Rock County, where she became the first woman in 10 years to score a goal for the school’s coed soccer team and made an impression as an aspiring poet and student organizer.

Then, in 2011, the state changed its policy and began requiring undocumented college students to pay out-of-state tuition, nearly tripling Téllez’s costs. She made plans to drop classes. But her professors and advisers intervened, helping secure funds for Téllez and other immigrant students to remain enrolled full-time.

Téllez received her associate’s degree in December 2012. UW-Milwaukee became her first-choice school to pursue her bachelor’s after she toured its Roberto Hernández Center. Serving Latino students and their families for more than 40 years, the center offers cultural programming and financial and academic advising.

“Knowing that there was a center dedicated to students whose first language is Spanish, where we can bring our family in to ask questions, that for me made the whole difference,” Téllez said.

UWM’s diverse student population and vibrant culture — nearly 300 student organizations are active on campus — further convinced Téllez that UWM was the place for her. UWM advisers and staff at the Roberto Hernández Center helped her establish state residency so she could pay in-state tuition, and she enrolled in spring 2013.

As an undocumented student who was brought to the U.S. as a child, Téllez also benefited from the Deferred Action for Childhood Arrivals policy implemented in June 2012 to offer two-year visas to people who might otherwise be at risk of deportation. Called “Dreamers,” these young people were given new protections to legally pursue college and career opportunities that would otherwise be out of reach.

As a UWM Dreamer, Téllez joined student organizations and even co-founded one, the multicultural sorority Zeta Sigma Chi. But mostly, her first three years on campus were filled with jobs. Lots of jobs. To pay tuition and rent, she painted and pulled up carpets in university residence halls. She worked in an eye doctor’s office and cared for a man with cerebral palsy.

Then, facing mounting student debt and struggling in her pre-med major, she took an 18-month break from school. But she kept volunteering with organizations that advocate for undocumented students and eventually began assisting UWM arts instructor Raoul Deal, who asked her to supervise high-school students working on a community mural celebrating Wisconsin’s Latino history.

That volunteer work became a paid research appointment, and last fall Téllez returned to UWM to study communication. Her grades improved, and the sorority that she helped start grew from seven to 24 members.

In May, along with her degree, she received the Puente award for outstanding leadership from the Roberto Hernández Center. It recognized her accomplishments on campus and in advocating for the rights of other students protected under DACA.

She spent her first summer as a college graduate helping public health professor Jenna Loyd interview social service agencies and community leaders who work with immigrants and refugees in the Milwaukee area.

“My college journey, through activism and research, has really given me a voice,” Téllez said. “Now, I want to help give other people the chance to say: ‘I’m not a bad person, not a criminal, I’m doing everything I’m supposed to be doing.’ I think some people have incorrect ideas about who undocumented people are. If more of our neighbors hear our stories, that will be progress.”

Téllez’s post-college work career began on Aug. 21. She was hired to coordinate after-school programming at Notre Dame School of Milwaukee, a Catholic school on the city’s south side. She felt privileged to help other Latino families fulfill their dreams of an American education.

But on Tuesday, Sept. 5, her future — a career in Milwaukee, graduate school in the U.S., the chance to help a new generation of Latino youth get to college — was thrown into uncertainty. That’s when the Trump administration announced plans to end the DACA program in six months unless Congress finds a more permanent solution.

“Today, I talked to my employer about me not being employed there after March 5.”

There are more than 200 Dreamers enrolled at UWM this fall. Téllez, as an alumna, considers herself one of the lucky ones. Whatever happens to DACA, she has earned an American college degree and has a successful work history behind her.

“Being unemployed in a few months is something I initially didn’t consider possible,” she said. “With the decision (Sept. 5), it’s like: ‘OK, this might actually happen. I have to talk about it.’”

So Téllez will continue talking about her experiences, something that has always brought her comfort and purpose. But she says it feels different now. She wonders if she’ll be deported from Milwaukee, which she considers her hometown. She worries that her 2013 DACA application might expose her mother, who remains undocumented.

Yet the only thing that she’s truly afraid of is setting the wrong example for the families she meets through her activism and in her work at Notre Dame.

“I want people to look at me and think ‘Cinthia was able to do this.’ But knowing that they’re looking at me now and thinking, ‘She was able to do it, but she might be deported’ is a reality that is hard to grasp. It’s hard to tell people that things are going to be OK when you’re in limbo yourself.”