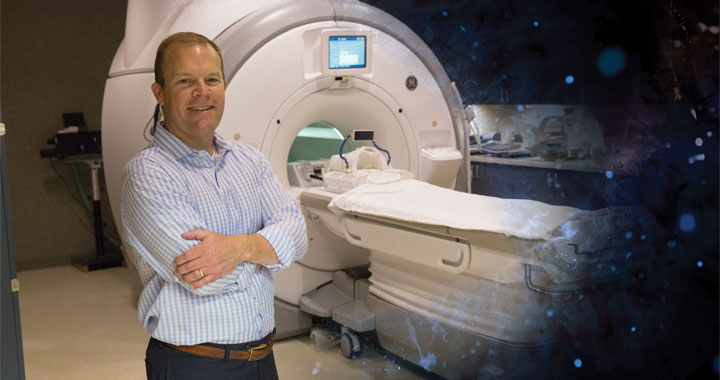 Dr. Michael McCrea (‘91, MS; ‘94 PhD, Clinical Psychology) is a leader in the field of concussion research.

He’s one of the world’s foremost experts on concussion, but for so many years, few outside of Michael McCrea’s profession showed much interest in his work. At parties, friends and neighbors had no desire to chat him up about mild traumatic brain injury, and the UWM alum’s groundbreaking research continued mostly in anonymity.

How the landscape has changed. Today, concussion is a mainstream topic. You can hardly watch a football game without hearing about it. Now, when someone learns of McCrea’s specialty, the questions come fast and furious.

“This is one of those topics that has gone, in 10 to 15 years, from total obscurity to dominating national headlines, and not just in sports,” McCrea says. “It’s on everybody’s radar, from the front offices of professional franchises and sports governing bodies right down to soccer parents.”

The 52-year-old McCrea has played a crucial role in education about the issue. He’s director of brain injury research at Froedtert & the Medical College of Wisconsin, as well as a professor of neurosurgery and neurology there. He’s helped shape the improved concussion protocols used today by sports and military professionals alike.
“Our work in sports gets all the attention,” McCrea says, “but our program is focused on the study of all populations at risk of traumatic brain injury, whether it’s athletes, military service members or civilians.”

His fervent love of sports makes McCrea at home on athletic fields, which often serve as his research laboratories. He’s comfortable around coaches and players, and they welcome him into what can often be a closed-off community. He’s even
served as one of the clinical neuropsychologists who assess head injuries on the sidelines of Green Bay Packers games.

UWM played a crucial role in putting McCrea on the path to that work, and in 2016, the UWM Alumni Association honored McCrea with its Lifetime Achievement Award. UWM is where he earned a Master’s degree in clinical psychology in 1991 and a 1994 doctorate in the same field.

“The UWM program was really rising at the time, and the idea of being in Milwaukee was just a great fit for me,” says McCrea, who got his Bachelor’s degree at Loras College in Dubuque, Iowa. “My whole life, at every turn, I’ve been fortunate enough to run into really terrific mentors.”

McCrea says UWM’s training and ties to a collaborative network, including the  Medical College of Wisconsin and the Clement J. Zablocki Veterans Affairs Medical Center, were invaluable.

“It was like a gold mine, with the experienced faculty at UWM providing the academic training, combined with the ability go out and get real-life clinical training,” McCrea says. “I had so much experience under my belt. I left UWM well prepared for the bigger stage.”

McCrea performed postdoctoral work at Northwestern University. That’s where he met Dr. James Kelly, one of the first researchers to study sports concussion and now a professor of neurology at the University of Colorado School of Medicine.

“Mike is a guy who had an interest and took charge,” Kelly says. “He is so confident and smart. He’s completely self-propelled. We became peers far earlier than normal.”

McCrea and Kelly teamed with Christopher Randolph, a clinical professor of neurology at the Loyola University Chicago Stritch School of Medicine, on concussion-related research as far back as 1994. That was some two decades before the topic gained any significant public attention.

McCrea was lead author for their research paper on standardized assessment of concussion. It set guidelines for concussion management in sports and was adopted by the American Academy of Neurology. It’s become the world’s most widely-used concussion assessment tool, Kelly says.

McCrea finished his postdoctoral work and returned to Milwaukee, where he spent 15 years at ProHealth Care. He also had a faculty appointment at the Medical College of Wisconsin and became full-time there in 2011.

He’s continuing his game-changing concussion research as one of three principal investigators in a landmark $30 million initiative. Known as the Concussion  Assessment, Research and Education Consortium, or CARE, it’s funded by grants from the U.S. Department of Defense and the NCAA. CARE research takes place at more than 30 sites nationwide, including four U.S. military service academies and a mix of NCAA Division l, ll and lll institutions. Baseline assessments are conducted on all male and female athletes from every sport on each campus. At the service academies, all cadets are enrolled, including non-athletes. Any participant who sustains a concussion undergoes detailed evaluations at various points after the injury.

“This helps us develop evidence-based approaches for assessment, returning to play and rehabilitation,” McCrea says. He pauses for a moment and shakes his head a bit. He’s reminded how it used to be standard practice for concussed athletes to return in the same game or practice. “That’s a rare occurrence these days,” McCrea adds. “There are now resources to guide everyone in the management of this injury.”

McCrea’s portion of the CARE initiative focuses on six of the sites, including the University of Wisconsin-Madison, the U.S. Air Force Academy and West Point. All football players at the six sites are equipped with helmet telemetry that records the location, duration and magnitude of every head impact they sustain.

That helps researchers study concussion’s effects on brain structure and function. They’re also looking at how long it takes the brain to recover from symptoms and function normally. And the assessment goes beyond how an athlete feels to include MRIs and blood biomarkers. The results will create better guidelines for returning to action after a concussion.

McCrea knows the increased attention on concussion has sparked fervent responses, including calls from some corners to abolish sports such as football, where concussion is especially prevalent. He respectfully disagrees.

“I think there’s great value in participation in all competitive sports and that the benefits far outweigh the risks,” McCrea says. “Concussion has dominated the conversation in sports medicine these days, but when I think of public health matters in sports, there are other important issues, too, like overuse injuries in all levels of athletics, including youth sports.”

He knows how much progress has been made in his field, and how a better public understanding will continue to push things forward.