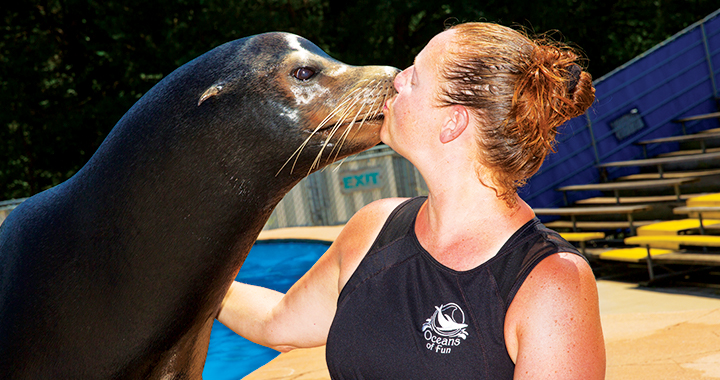 Astronaut, ballet dancer, and zookeeper seem to be the popular career choices among the nation’s five-year-olds, and Kelly Kamrath was no different: She wanted to work with marine animals. In landlocked Wisconsin, she wasn’t sure she’d ever get the chance.

Her five-year-old self would be very pleased today.

“It’s an all-encompassing job,” she said. “I think the best part of my job is really the animals themselves, but it goes so far beyond the animals. The smiles we bring to the guests’ faces are great. They fall in love with the animals and then engage in conservation practices.”

Marine conservation is one of the major missions of Oceans of Fun. Kamrath’s passionate about that mission, and it started during her days at UWM.

Originally from Sussex, Kamrath chose UWM for its proximity to home and because of the strong Biological Sciences department. She majored in Biology, focusing on animal care and behavior courses, and began volunteering and interning with Oceans of Fun even before she graduated in 1996.

After graduation, Oceans of Fun hired her, and 20 years later, she’s still in love with the job.

Working with pinnipeds requires patience and a commitment to building a strong, trusting relationship with each animal. Oceans of Fun trainers utilize positive reinforcement and the help of a clicker to communicate with the animals. 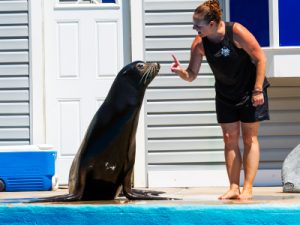 “The click indicates a job well done, and is a communication tool which lets the seal or sea lion know that they have performed their task correctly – and lots of positive reinforcement, like fish, a back rub, or toys, is on the way,” Kamrath said.

Training often makes use of their natural behaviors. Seals and sea lions like to “greet” each other and anything new by nudging it with their noses. Kamrath uses that behavior in target training, teaching the animals to touch an indicated object with their noses. It’s fun for both parties involved.

And, if you were wondering – and a lot of people do, Kamrath said – there are easy ways to tell the difference between seals and sea lions. Sea lions have external ears and large front flippers. Seals lack an external ear, and their front flippers are much smaller, so they move on their bellies while on land. Sea lions, on the other hand, can move quickly, sometimes reaching speeds of 15 miles per hour at a full gallop. 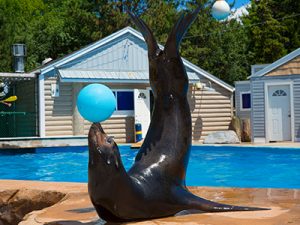 In addition to training the animals and introducing zoo visitors to marine mammals, Kamrath and her staff pay close attention to the Oceans of Fun mission of conservation. Not only do they educate the public about the dangers facing these creatures in the wild, including warming oceans, declining food sources, and decreasing habitats, but they work on the practical side as well. In recent years, there have been several Unusual Mortality Events along the California coastline resulting in thousands of sea lion pups stranding due to starvation.

With the water temperatures changing the food sources in the ocean are affected. Sea lion mothers often are forced to abandon their young pups due to their inability to find fish, Kamrath said. Oceans of Fun has stepped in directly to rescue and provide a permanent home for several young sea lion pups affected by these events, who are otherwise unable to survive in the wild.

Caring for their animals is a full-time job, too. Pinnipeds need to eat regardless of whether the calendar proclaims a weekend or a holiday. Medical emergencies don’t happen on a 9-5 schedule. Even so, Kamrath said, working at Oceans of Fun is a dream come true.

“I was always that little girl who went down at Sea World to volunteer for the dolphin and orca shows. … I’ve always been a water-lover and I love the ocean and nature,” she said. “Over the years, I fell in love with not only the animals at Oceans of Fun, but the mission of what we do here.”