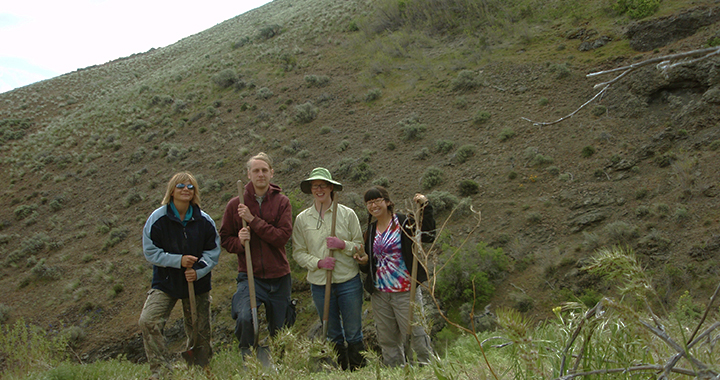 Holly Shea is an archaeologist who, most of the time, leaves artifacts buried in the ground.

It’s counterintuitive, but that’s how her employer, the Confederated Tribes of the Umatilla Indian Reservation (CTUIR), wants it. Archaeologists excavate materials to learn about the past, Shea said, but the Umatilla already know about their past. They’re more interested in preserving their past for the benefit of the present and future generations, and she’s ready to help.

Shea is an archaeologist with the CTUIR responsible for overseeing survey and excavation projects and cultural resource management matters. Section 106 of the National Historic Preservation Act requires federal agencies to consider how their projects might affect cultural resources. Shea is one of the people who helps determine project impacts.

“It’s interesting work for me and I like being an advocate for the tribes and making sure their cultural resources are protected and their treaty rights are respected throughout the process,” Shea said. “Working with the tribes is great. I’ve found the people to be incredibly warm and giving and interested in doing the right thing in terms of protecting their cultural resources.”

“Cultural resources” is a broad term and Shea likes to define it loosely to protect as much of the CTUIR ceded lands as possible. It can and does refer to prehistoric and historic artifacts, but Shea argues that a cultural resource can be anything from a landmark to a geographic location.

“I don’t think cultural resources are just tangible objects; it can be viewsheds or rivers,” she said. “If it’s a place people go to for spiritual experiences, that’s a cultural resource that’s pretty important. It makes you think outside the box.”

She learned to do just that at UWM. Shea, a St. Louis native was always digging in the dirt as a young girl and loved visiting historic sites like the Cahokia Mounds in Illinois, the site of a prehistoric Native American settlement. Archaeology was her obvious career choice, but the University of St. Louis, where Shea originally began her college education, didn’t have an archaeology field school at the time.

UWM did – and it had an American Indian Studies major.

“Pretty much all of the classes that I took with my AIS major, I loved,” Shea said. “I double-majored in that and Anthropology with an archaeology focus.”

Shea was especially taken with her field school experience; she learned the ins and outs of archaeology under Professor Robert Jeske, who regularly takes students to the Crescent Bay Hunt Club site in southeast Wisconsin to teach students how to dig for Oneota Indian artifacts.

“My pit partner and I excavated a one-by-one meter plot we were assigned and found all kinds of neat things. It was really exciting,” Shea recalled. “I felt like I learned the tricks of the trade pretty well.”

She learned them so well that she was contracted to work on a Mississippian village site near St. Louis shortly after she graduated in 2004. Still, she knew if she wanted full-time work, she was going to need a Master’s degree – and so Shea found herself at Central Washington University pursuing a degree in Resource Management. She graduated in 2012 and began working for the Confederated Tribes of the Warm Springs Reservation of Oregon before landing at her current position.

Her American Indian Studies major and working closely with tribal members have given Shea a profound respect for Native American culture, artifacts, and lands. In addition to working with federal and state agencies to assess what impact government projects may have upon local cultural resources, Shea also reviews government correspondence to the tribes, looking over land-use requests and other documents.

It can be a confusing legal maze – “The Umatilla ceded lands extend into Washington, but the reservation is in Oregon, so I’m working with both Oregon and Washington state laws on top of federal laws,” she said – but working with the people and preserving the land make it all worth it.

And, Shea says, when she does find artifacts like ceramic pottery shards or stone arrowheads, she’s reminded of why she got into archaeology to begin with.

“Just holding those things in my hands that somebody else formed with their hands one thousand years ago is so cool.”

Geosciences study on fluid movement off to a great "rocky" start