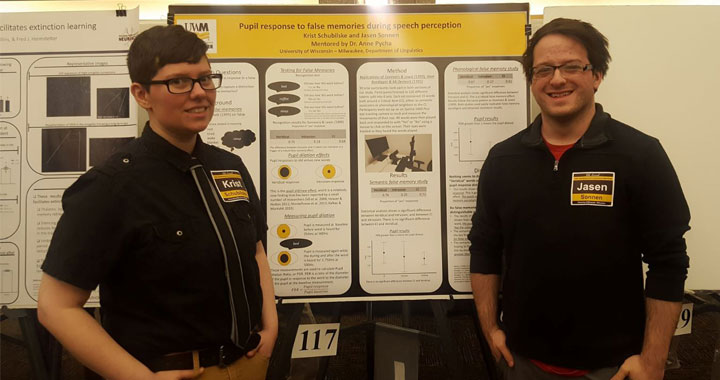 Krist Schubilske found her Linguistic research to be eye-opening. Literally.

Schubilske spent her senior year at UWM as a research assistant for Linguistics professor Anne Pycha. Dr. Pycha is looking into false memories and our physiological responses. Specifically, if we think we heard a word but we really didn’t, do our eyes tell the tale?

At the basis of this question is a phenomenon known as false linguistic memory – when we remember hearing a word that wasn’t actually spoken. For example, think of the word “cat”, and then make a list of about 15 words that sound similar – cap, bat, at, cab, etc.

“The idea is that if you play someone that list but not the word it’s related to, people remember about 80 percent of the time that they’ve heard the word ‘cat’, even though they didn’t hear it,” Schubilske said.

That’s because similar-sounding words are stored in the same “file drawer” of the brain.

“During speech perception, our brain is activating a bunch of different words at the same time,” Schubilske said. “When you hear a word, your brain is also accessing the words that sound like it and have definitions that are close to it. With a word like cat, you’d also be accessing words that are in semantic associations, like ‘kitten’ or ‘meow.’”

Studies surrounding false linguistic memories have been done before, but Pycha took the research a step further. Using a machine called an EyeLink 1000 that tracks eye movement, she and her research assistants, Schubilske and another student named Jasen Sonnen, took a careful look at their subjects’ pupils as they listened to the lists of words designed to elicit false linguistic memories. The researchers would play a list of about 15 or so words related to a “critical item” – like the word cat – and then ask their research subjects if they remembered hearing the critical item, though the word had never been played.

Pycha and her assistant were looking at the Old/New Effect. If you hear a word that you’ve recently heard before, your pupil will dilate slightly more than if you were to listen to a new word. They wanted to determine if there was a difference in pupil dilation between real linguistic memories versus fake linguistic memories – old words and new words.

“What we did find is that the pupil actually does dilate slightly bigger for words that you’re having a false memory for,” Schubilske said. “That was really exciting to find because in all the false memory studies that have been done in the past, … there wasn’t the capacity to capture the difference between any sort of response for the real memories and the false memories.”

Pupils dilate due to all sorts of reasons, from light exposure to what researchers term “cognitive load” – some experiments revealed that subjects’ pupils dilated more when viewing a long string of written numbers versus a shorter string.

Only recently have scientists discovered the Old/New Effect.

“To my mind, this deepens the mystery, because, unlike remembering a long string of numbers, hearing an old word should not be a task that requires a lot of cognitive load. Given this, I’d venture say that there is not even any agreement on what cognitive factors cause the pupil to dilate,” Pycha said.

In the future, Schubilske envisions that this research will not only help us understand how our brains decode language, but it might also open a new avenue for exploring diseases like Alzheimer’s and dementia.

Schubilske and Sonnen presented their research at the UWM Undergraduate Research Symposium in April this year. For Schubilske, it was the culmination of one of the defining elements of her undergraduate career.

“I am privileged to go to a top-tier research university,” she said. “It was by far the best experience of my undergrad career to do some hands-on work and apply theory in actual research settings, and get to practice with other people.”