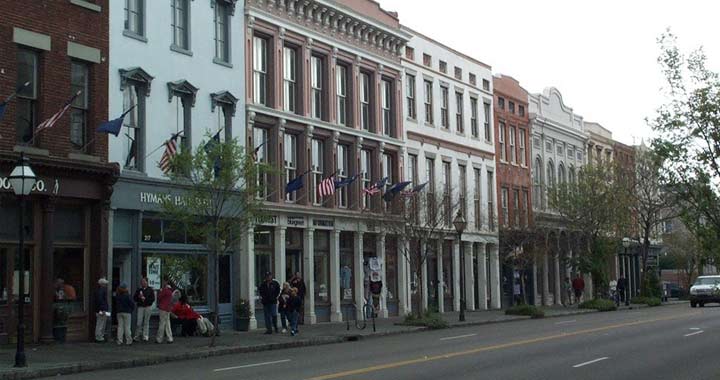 When she heard the news that a gunman had opened fire in the Emanuel African Methodist Episcopal Church in Charleston, South Carolina, in June, Shevaun Watson was horrified but not surprised.

Watson, an Associate Professor of English, studies rhetoric. Most recently, she’s been interested in the rhetoric of southern heritage tourism, especially in Charleston. Over six years and countless tours – walking, carriage, Civil War, ghost, eating, you name it – she’s found a disturbing narrative interwoven in the information presented to tourists.

“The tourism industry is invested in the construction of these narratives about the past that shore up the white elite as being these imperiled people throughout history, who have had to withstand slave rebellions and hurricanes and fires and the North, and on and on,” Watson said. “(Tourism) lulls people into not being very critical about history, or about race, or about slavery. That works in just really profitable ways … in that it feeds into some of the white supremacy that we see there.”

Watson detailed her findings in a paper published in Rhetoric Society Quarterly spring issue and outlined the major problem with the narrative: It works. Tourism is a cash cow in South Carolina and especially Charleston. The state raked in $18 billion in tourism dollars alone in 2014, and 2015 is predicted to set a new record for income. Charleston is also consistently ranked as a top tourist destination, both for domestic and international travelers.

Unfortunately, says Watson, it’s likely that this beloved narrative is preventing people from really talking about the city’s historical involvement in the slave trade and its legacy of racism. It creates an environment where people may very well buy into the idea of whites being a beleaguered group, or might decide to open fire at a historically black church.

“That unwillingness to engage in the hard conversations really hampers our ability to respond productively to these kinds of race-related problems that we continue to have. I think tourism plays some role in this. I was not surprised that (the shooting) happened in Charleston,” Watson said.

What’s more, she’s seen tourists playing straight into the narrative, though she hasn’t conducted all of the research she would like to do on this particular subject. She’s been on several historical tours where those in the group asked not to hear about the city’s history of slavery, even on outings billed specifically as slavery tours.

“When I did chime in one time and said I would like to hear a little bit about it (the tour guide said), ‘Oh, it looks like we have a Yankee in our midst.’ I don’t think there is a mechanism where people who might share my same concerns could really actually say something,” Watson said.

Watson conducted her research by not only participating in the city’s tours several times over, but also by poring over tour guide manuals, studying literature on other tourism draws like monuments, and closely examining the economics of the industry.

In her research, she found hidden costs to Charleston’s tourism industry, first among them accurate history. Some of the tour guides in Charleston were working from manuals that hadn’t been updated in four decades and were giving out incorrect information. Another cost is to the city’s residents. For example, historical preservation of old buildings makes housing prices extremely expensive, driving out the middle class, especially black middle class residents.

Watson would like to see that change. She thinks better education for Charleston’s tour guides and measures in place to protect against structural inequalities that make things like housing unaffordable could help. She also wants to see the city do more to promote African American tourism, especially if the revenue could be channeled to help the city’s struggling lower class.

But, it’s hard to change a system that is generating millions in profits and employing a significant portion of the city’s residents.

“It’s a self-propagating, feel-good, making-money system, but it’s had huge impacts on the place that I think are related to racism, hate crimes, and the tragedies that we saw at the AME Church,” Watson said. “And unfortunately, I think in tourism, that church will just become part of a larger narrative.”