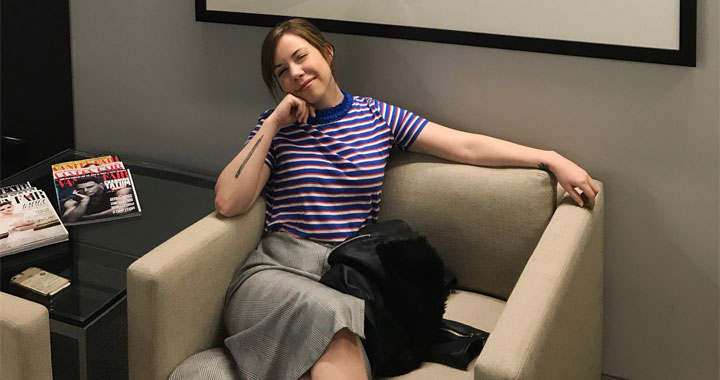 How did you get started at Vanity Fair?

It was a complete surprise to me. The one thing I have learned is that the more you network with people, the more opportunities you get. During my time at the New School, I worked as my thesis adviser’s research assistant. I learned that her husband writes for Vanity Fair.

Near the end of the semester before I graduated, I got an email saying that there was an opening at the magazine, and my thesis adviser kindly recommended me for the position. Of course, I had to interview like anyone else, but I truly believe that networking with people got me here.

What does a production assistant do?

I support the production department, including the production director and the associate managing editor. My job is to take each page of the magazine through every stage. It starts with the writer sending us the text, which we clean up for stand out errors, and then we send it to other departments like copy and research. From there, we merge art with text using InDesign and InCopy to get ready for the print process.

And now you’ve started writing for the magazine too.

Another part of my regular job is to write for a little bit for print. I don’t get a byline for these things. It’s just things that regularly occur in the magazine, like contributor’s notes or table of contents entries. For these, I reach out to some of our writers and photographers and interview them.

The phone interview was really fun. I was incredibly nervous. She is very much a professional though, and I barely had to prompt her. She kept going on, which is exactly what you want in an interview. She was talking about her childhood in Germany, and I was like, this is going a little off-topic, Heidi, so let’s bring it back in – and that was all the direction I had to give her. It’s a fun moment to look back on.

How was it seeing your byline for the first time?

I’ve had my fiction published before in small literary magazines, but having my name on Vanity Fair is something that extends way beyond my literary community. My mom knows what Vanity Fair is, and people who aren’t necessarily readers or writers know the name.

Going forward, I would like to write more for web. I love my job very much, but I did go to school for writing. I’ll be brainstorming and making pitches.

What are the elements of a good pitch for an article?

A subject line that an editor won’t ignore is a good start. You have to remember the sheer volume of emails these editors get daily. You need something that stands out. I also include my word count, the deadline, and what date I want it to run – all the facts.

When I pitched Heidi Klum, it wasn’t as hard. She’s a celebrity, so people are already paying attention. Beyond that, you want to make the editor feel like you know what you’re doing with the pitch. For example, I had already reached out to Heidi’s publicist to see if she would be interested in doing a one-on-one with us, to make sure that if my editor said yes it was a solid deal and we wouldn’t have any issues moving forward.

Do you ever have moments where you think, ‘I can’t believe they hired me’?

Pretty much everyone who works at Vanity Fair has a degree or background in journalism. A lot of them have wanted to work here their whole life. I just showed up. I feel a little bit of guilt for that, but I am qualified. I’m a writer. I’m good at my job and I know what I’m doing. But I think that not planning to be there gives me a bit of a different perspective.

[You need] persistence. You will get rejected a lot. It’s a very tough field, and when you jump into it with no background, like I did, you’re not going to understand a lot. You just have to keep going