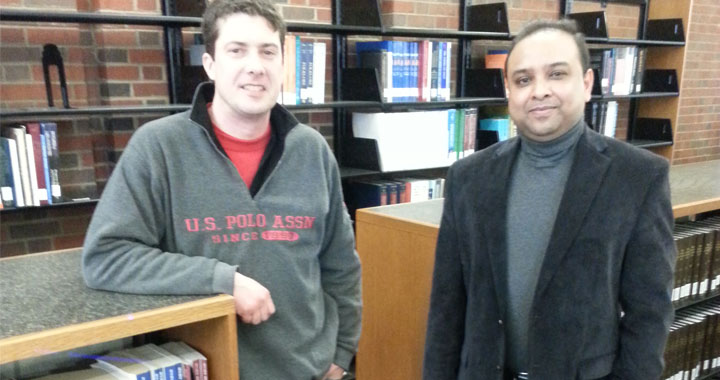 Years ago, a Milwaukee train manufacturer tried to cut costs by outsourcing its window production to Indonesia. It turned out to be a very expensive move.

“It was a bad decision because the Indonesian workers take a lot of holidays. The windows wouldn’t show up on time and they would miss deadlines,” Chris Ford recalled. “The company thought they were winning and they were losing, and they were very dissatisfied that they had outsourced.”

UWM Economist Avik Chakrabarti is hoping to keep other companies from making those same mistakes.

Chakrabarti has studied outsourcing among Milwaukee companies for years by using “big data” gathered by student volunteers. Chris Ford, a 2007 economics and political science alumnus and the founder of his own small business, was the first student volunteer who began researching outsourcing by approaching local businesses to survey them about their practices. Together, he and Chakrabarti hammered out a set of questions that the student researchers use as a springboard today – questions regarding production numbers, wages, and factors that drive the decisions to keep jobs local or to move them overseas.

Chakrabarti acts as the “hub” for the data, reviewing his students’ research and looking for patterns. It’s a daunting task because big data is, well, big. It goes well beyond facts, figures, and percentages.

“When we say ‘big data’, we mean data that has some stories to it, some pictures, some patterns, some case studies to it, that more creative people can analyze, rather than running old-style statisticals or econometric programs,” he said.

By compiling and analyzing these massive data sets, Chakrabarti hopes that he and his students will be able to present resources and information to local businesses that are trying to determine whether outsourcing makes economic sense.

Outsourcing involves moving certain parts of a production chain to different locations in order to minimize costs. For example, a car manufacturer based in Detroit can move factories to Wisconsin, Mexico, or China if labor, transportation, and environmental regulations are more favorable in those locations.

The problem, Chakrabarti said, is that while outsourcing often means that the finished product will cost less money for consumers, it’s hard to buy anything if your job has been moved overseas.

“The blame is on us, the consumers. If I go to the shelves and see that [something] made in China is a dollar less, I’m going to buy it. Our companies have no choice. They have to go abroad. They have to find ways to cut their costs,” Chakrabarti added.

But often, there are hidden costs to outsourcing that many businesses don’t understand until it’s too late. Ford remembers his research findings when he and Chakrabarti first began the project. Many companies, he said, had some unpleasant surprises when they tried moving jobs to China.

“A lot of them didn’t know that the Chinese celebrate their new year in February and would go home for a month. They would have scheduled shipments that they thought would just go on. And it turned out that they were wrong and they were missing deadlines,” Ford said. “They thought if they moved it there, it was just going to roll on along like it always has. Well, these guys had never worked in an assembly or in a factory or anything other than a farm field, so they weren’t skilled. Whole product lines were coming off the lines unsellable.”

By compiling big data, Chakrabarti hopes that the research of his students can serve as a reference point for area companies that are considering outsourcing – and hopefully, convince them to keep jobs local.

“The off-shore outsourcing decisions that they make are often flawed. It does not lead to more efficiency. They realize it later on – but it’s too late at that point,” he said. “This project could inform businesses about specific cases, where we can say ‘Here’s a case-study where somebody decided to move but later on realized that this was a mistake because emerging patterns were not taken into account.’”