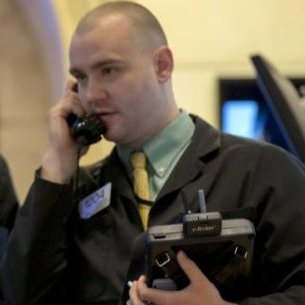 Jon Wisniewski isn’t exactly the Wolf of Wall Street, but he does enjoy his job as COO of AmerX, an institutional brokerage firm situated on the floor of the New York Stock Exchange.

“There are a lot of times I walk into work and look around and think, wow, I can’t believe I’m here,” he said. “It’s a cool gig. I’m very lucky to be here.”

He got there with the help of UWM. Wisniewski grew up in Brookfield and joined the U.S. Army when he was 19 years old. He served two tours in Iraq during his three-year military career, and applied to UWM online over a satellite connection while he was overseas. He started attending school while still in the Reserves and majored in Economics.

“I chose Economics because I was really into politics growing up. … I was always very entrepreneurial, but I didn’t want to get a business degree,” Wisniewski said. “Economics also had a basis in politics, and it appealed to me.”

Wisniewski got his first taste of Wall Street through the UWM Economics Mentoring program, which pairs students with Economics alumni who can give career advice and expertise. Wisniewski was paired with Jim Schimpf, who was CEO of Brewery Credit Union at the time. Schimpf had experience calling in orders for clients to the trading floor of the New York Stock Exchange.

Wisniewski credits that relationship for exposing him to his current career.

“That was the closest I had ever gotten to Wall Street, the New York Stock Exchange, and things like that. We would talk about the career path that I was thinking about,” he said.

Wisniewski graduated with his Bachelor’s degree in 2011. He had been accepted to Rutgers University to take prerequisites for graduate school, but declined in favor of working. He moved to New Jersey and got a job first as an accountant and then a day trader for a small hedge fund. Then, in 2013, he found Raven Securities Corporation, an agency broker dealer on the New York Stock Exchange, and was named head of operations after just a few months.

In his new role, Wisniewski was responsible for dealing with the company’s technology, running its day-to-day operations, and ensuring client orders were carried out – and he was often expected to make trades on the floor of the exchange.

Working on the floor isn’t as glamorous as the movies make it out to be – for one thing, trading is much more digital than it used to be.

“It’s a lot more electronic. … There’s the hand-held; every member of the New York Stock Exchange, and I’m a member, has a hand-held (device) that goes to specific exchange systems that can handle specific types of orders so that people who are not using a floor broker can use those types of orders. There are screens everywhere,” Wisniewski said. But, “On the opening and closing of trading, there’s still that hectic activity that people associate with the trading floor.”

Recently, Wisniewski left Raven and joined America’s Executions, where he is now the COO. His role is similar to his previous job, but he has more responsibility and has a hand in guiding the future of the company.

“Essentially, I’m digging through the data to help make business decisions, to save money here or make more money over there, etc. That I really love to do because that’s growing the business – making the decisions that actually drive growth,” he said. He credits his education at UWM and the firm background he received in Economics for much of his success.

“When I do analysis for my business decisions here, I do statistical analysis. I’ll look at variances and things like that, and those are things that are looked at in Economics. Plus, it’s the market – interest rate movement, the Fed and how it works, what its function is. When I thought about investments, personally, I’ve gone back to old research papers I’ve done,” he said. “It is competitive, and it is difficult, and the people are hard – but it’s not impossible. If you work hard and study the right stuff, and you keep applying and working on it, you’ll get there.”

Italian professor's book takes on the Mafia through fiction