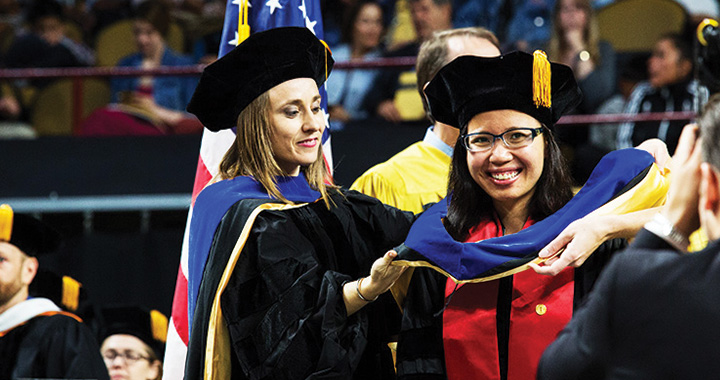 In January 2017, Linh Pham took part in what can best be described as “speed dating for economists.” Navigating a sea of potential employers, she scored 11 quick interviews. But she didn’t receive a single offer.

“At the time, I felt like it was the end of the world,” said Pham, who graduated from UWM in May with a doctorate in economics. “I was doubting myself, but my adviser told me to keep trying … You have to move on.”

She did. And her persistence paid off. Shortly thereafter, Pham was offered her dream job, a tenure-track faculty position at the University of Central Oklahoma.

“There were two moments where I knew I would make it through my PhD. The first was my publication in a really good journal,” said Pham. “The second was getting a job offer that I really liked.”

Pham’s research interests include how to incentivize the development of solar panels and wind farms, and she is particularly intrigued by how the developing world interfaces with green technology. But day-to-day, Pham loves the practical way economics can be applied to almost any decision.

“Economics is about weighing the cost and benefits of different options and choosing the one with the highest benefit,” said Pham. “It helps people make good choices.”

Pham, who attended UW-LaCrosse for her undergraduate degree, wanted to stay in Wisconsin for graduate school. The small class sizes and daily face-to-face interactions with her professors are what attracted Pham to UWM. She developed a strong cohort of peers, and in her second year her network expanded to include her adviser, Itzi Lazkano, assistant professor of economics.

“One word cannot describe Itzi,” Pham said. “She really goes out of her way to help me. Not only as a student and researcher…She really cares about my well-being.”

Lazkano was equally as impressed by Pham, whom she describes as “one of the best students we have had in the program.”

“[Pham] is creative, independent and has a great balance between doing independent work that she believes in and teamwork,” said Lazkano.

Pham strongly believes in service work, and this allowed her to fully engage with the campus community. Among other activities, she tutored for Upward Bound and volunteered with the Golden Key International Honour Society.

Pham plans to continue volunteering at University of Central Oklahoma, where she will begin her faculty position. She is excited by the new opportunities, but she will miss UWM.

“The professors were great, my friends who were also graduate students in my department were very supportive,” said Pham. “[I will miss] being a part of the whole community at UWM.”

American Indian studies grad sees a responsibility to others