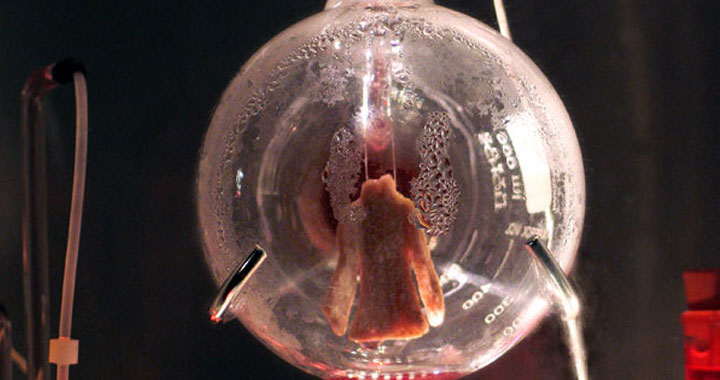 In a sterile, controlled glass sphere grew a tiny piece of art, engineered from a living layer of tissue grown around a biodegradable matrix. Its creators called it “Victimless Leather,” a small coat grown in a controlled environment meant to make audiences question the practice of using animal hide to create actual leather garments.

For Jennifer Johung, it represented far bigger questions – things like, how we do defi ne life? How long and under what circumstances are we going to live? What are our responsibilities toward life that we create?

Johung, a UWM associate professor of Art History, recently completed a manuscript for a book covering BioArt, a practice which uses living materials like tissue, cells and bacteria to create works of art. Creations have included pieces like the Victimless Leather jacket, dolls crafted from living tissue, paintings colored by bacteria with fl uorescent proteins, and more. It’s a relatively new art form and therefore an unexplored fi eld. Johung has conducted her research mainly by interviewing the artists who create such works. She became interested in it as a way to impress upon her students some of the controversies that can surround modern art.

“(Initially) I honestly thought BioArt was really frightening. I didn’t know what it was. BioArt is defi nitely not a fi eld that you encounter even in most contemporary art surveys,” Johung admitted. “Part of what I want to do is explain that BioArt is not this weird practice that exists in separation from a lot of contemporary art and architecture. It’s just that the materials are living, and that can be unsettling.”

It can also be difficult for people interested in the arts and humanities to reconcile the scientific knowledge needed to create these pieces, something Johung said she initially struggled with until she learned more about biotechnology practices during a workshop in Finland. It can be a hurdle simply to understand the terminology associated with biological processes, or to understand how the processes work.

Once that understanding is reached, however, Johung thinks BioArt has the power to unite disciplines that rarely meet.

“The workshop made a really strong case for artists and humanities people to sit at the same table (with scientists) and talk about things. I think we need this transdisciplinary dialogue, particularly to consider questions like, what does it mean to be living? What are the impacts of modifying life at a micro level?” Johung said.

She hasn’t come to any conclusions herself, but she thinks those questions are essential to consider in every discipline. They are questions with aesthetic, political, ethical, and legal implications, but no clear answers. BioArt brings these challenges to the fore because it does use living material – and at the end of an exhibition, that material is usually killed.

“It’s caused curators to start crying. It’s caused museum guards to say, ‘Can you show us how to feed these living forms? We’ll go on feeding them.’ The ethical questions are often surrounding what it means to end a form of life that you have brought into being,” Johung said. “Artists are bringing that into the open, but that happens all the time. There is a surplus of living stuff that exists in pharmaceutical labs by the tons. But we don’t see it.”

But, she adds, BioArt is about more than asking hard questions about life – it’s also about the joy of discovery in fi elds many people know little about. Artists are becoming more knowledgeable about traditionally biological fi elds and processes like DNA extraction, genetic modification, tissue engineering and more.

Scientists working in a lab have an end goal in mind, while artists are generally more free-form about their scientifi c creations – but the two aren’t as different as they think.

“Across the humanities, we’re becoming adept at doing interdisciplinary work. For me, this is almost the same thing,” Johung said. “When you engage with BioArt, y ou’re just talking to a biologist or a chemical engineer or an artist who’s trained in these sorts of fi elds. I think it just requires you to be playful and open-minded.”

Johung will be co-curating a BioArt exhibit in Perth, Australia in October.

He didn't just write 'Everyone Leads' - he lived it