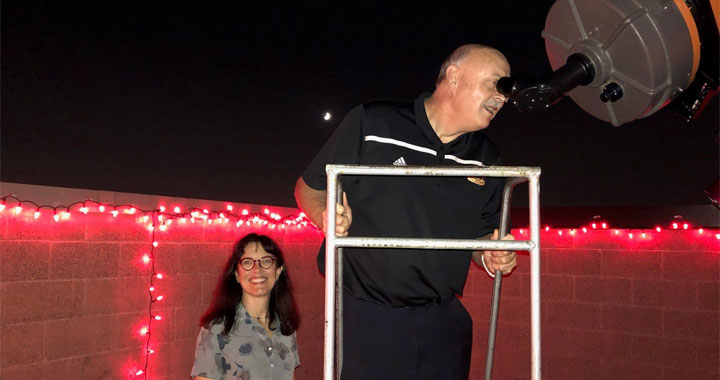 Stan Stojkovic gazes into the new telescope he donated to the UWM Planetarium while Planetarium director Jean Creighton looks on. Photo courtesy of Creighton and Stojkovic.

Saturn has never looked so good.

Stargazers can get a great view of the ringed planet, and countless other celestial bodies, thanks to a generous donation from Stan Stojkovic, the dean of UWM’s Helen Bader School of Social Welfare. Earlier this year, he gifted a $10,000 telescope mount for the Planetarium’s stargazing deck, allowing astronomers and amateurs alike a clearer picture of the skies above.

Stojkovic, though not a regular stargazer, was compelled to contribute to the Planetarium after attending one of the facility’s regular Friday night shows. At the end of the show, Planetarium director Jean Creighton appealed to her audience for help. She’s in the process of trying to enhance the Planetarium’s Apollo-era equipment, including the outdoor stargazing facilities and the Planetarium’s projector in the theater – an expensive endeavor.

“I went up to her and said, I’ll help you out. I think this is really important to UWM and important to students,” Stojkovic said.

“I am so grateful for Stan’s support of my vision,” Creighton said. “I want to inspire our community with the beauty of the night sky, which is elusive to urban audiences. Also, through live programming, I wish to bring the elegant ideas of how we understand our cosmos to people of all ages. In the last 11 years, the UWM Planetarium has had over 120,000 visitors including 50,000 K-12 students—our future space explorers.”

It’s important to support the Planetarium, Stojkovic said, because stargazing speaks to the fundamentals of science.

“As a scientist who’s interested in the scientific method, this is the first order of science,” he said. “It’s the stars. Having students get the opportunity to look at the stars, study the stars, to me is really essential. There are enough young people who are really interested in that and so, why not support them?”

The new telescope mount represents a significant upgrade in equipment from the smaller and older telescopes the Planetarium has used before.

“Thanks to the generous donation of Dean Stojkovic, we have a Paramount MX+ computerized mount and a 14- inch Celestron (C14) telescope permanently housed on the Physics Building’s observation deck,” Creighton said.

Now, operators can locate and point to objects, near and far, with the push of a button. Once there, the computerized telescope will keep the point of interest in view, enabling visitors to see the object without needing to adjust the telescope
every few moments. As a result, viewers can spend more time looking at a particular celestial body, while seeing more objects per stargazing session than ever before.

Creighton added, “This mount supports future growth of the observatory, with possibilities including astrophotography and observational astronomy lab classes.”

Stojkovic hopes that his donation represents the first step in encouraging other individuals, public foundations, and private corporations to invest in the Planetarium as well.

“They have tons of stuff that they need repaired. They’re running this fantastic program on a shoestring over there, and that’s wrong,” Stojkovic said. “We can come together under a common purpose to try and move (funding) forward. I think the stars are the limit.”

And, he adds, he hopes his gift will inspire more people to get involved with the Planetarium by attending stargazing events or one of the Planetarium’s many programs throughout the year.

“The Planetarium is the first order of science. It lets us see things that we would not otherwise see, or would see only in a very limited, opaque way. This gives us an opportunity to see things totally differently and advance our belief in science,” Stojkovic said. “I think it’s so important to what the essence of the university is about. Let’s recognize it. Let’s appreciate it. Let’s understand it and make sure other people can understand it.”

You can contribute to the Planetarium, or plan your next visit to a Friday night show or a stargazing session, by visiting uwm.edu/planetarium.

Dead Men Do Tell Tales – at least, in Forensic Science