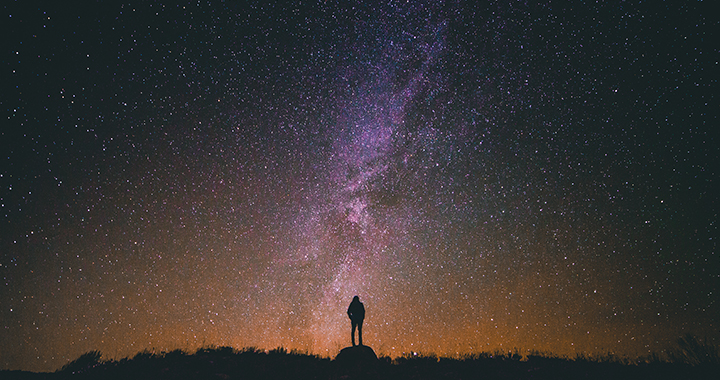 Dr. Jean Creighton (Department of Physics) and Dr. Robin Mello (Department of Theatre) were selected by the Alan Alda Center for Communicating Science at Stony Brook University to participate in a summer Boot Camp. This intensive week-long training is designed specifically for scientists and focuses on making complex scientific topics accessible, meaningful, and relevant to non-scientists and spark curiosity among the general public. Creighton and Mello participated in a series of workshops and simulations, as well as on-camera interviews and public presentations, and talked about their experiences upon their return.

What is your background, and what interested you in the boot camp?

Mello: My love of stargazing and astronomy goes back to when I was a child—back then the nights were dark enough (even living near New York City) to see the stars clearly. I spent many nights sneaking up to the roof of our garage, looking up, and trying to name the constellations. In Boston, while I was earning my doctorate, I became the Scientific Storyteller at the Museum of Science. And now, many years later, I’ve been very lucky to be able to work with Jean at the Manfred Olson Planetarium. We are working on a project called Tale of Scale – a trans-disciplinary outreach program that integrates astronomy, mathematics, and storytelling to teach UWM students how to interpret the cosmos. To advance and support Tale of Scale, we wanted to attend their program.

Creighton: As a little girl, I remember asking my mom where stars come from as I stared up into the sky. Also, I loved storytelling. I grew up in a household where we always told stories and discussed ideas. To learn more about how the universe works I studied physics and attended the University of Athens for my undergraduate work. Eventually I earned a master’s degree from Saint Mary’s University in Halifax, Nova Scotia, and a PhD from the University of Waterloo. After I left Waterloo I spent almost two years working in California on an infrared satellite called the Wide-field InfraRed Explorer (WIRE).  Then, I moved to Milwaukee to start my family, teach Astronomy, and since 2007 I have been directing the UWM Planetarium. (Robin and I) wanted to continue to work on our interdisciplinary project and to increase the audience and the imprint of the planetarium on the community and beyond. We had a chance to apply this year, and luckily, they accepted both of us so we could attend as a team.

Mello: Jean is an obvious choice (for the boot camp) because of her work here, her TEDx talk, and the fact that she is a SOFIA NASA Ambassador, but for me it wasn’t as obvious a fit. It is very unusual for them to accept a theatre-maker and I am so grateful that they accepted me. 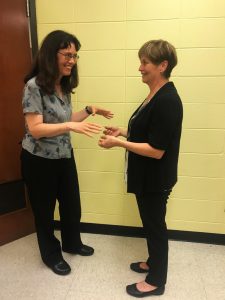 Best parts of camp and what did you learn?

Creighton: This team of 32 scientists was supportive and generous, providing thoughtful feedback to each other. My favorite part was seeing the growth of each participant as they took on each challenge. For example, we worked on the one minute talk, it’s when someone asks you about your work and you answer the Who, What, Why in a minute. Your goal is to engage someone enough so that they are curious about your work and ask more questions.

Mello: [Boot camp] helped me discuss the benefits of my research in clear and interesting ways. We were guided through a series of leadership trainings as well as simulations and challenges that used theatre techniques. It’s a model that has been developed by the center, nationally and internationally, over the past five years. One [moment] that stands out for me is watching a woman who is a chemist and an Associate Dean of a major university. She came in a bit tongue-tied. Then, during her on camera interview she suddenly came alive! Her joy at being able to talk about how research impacts daily life was contagious. Just watching people, including myself, come out of our shells was meaningful.

Creighton: It is important to find a connection with your audience through a common interest. I’ve learned to think about making realistic goals in the time allotted and to break things down incrementally.  I’ve learned to consider what goals the audience might have and then ask myself “what goal do I want to focus on for this audience?” Also, being enthusiastic – enthusiasm really helps others be interested in what is going on.

Robin: The lesson that I have taken away from the boot camp is how to be a better listener, researcher and leader. A good listener is one who shares and creates ways to have dialogue. Conversation is a two-way street. We all benefit from learning how to open the lines of communication. We all need practice so we can inspire and connect science to our every-day lives.

What was the biggest challenge of the boot camp?

Mello: The biggest challenge I faced when was trying to change a habit I have of over-explaining things.  I worked on approaches like how to clarify, communicate salient facts, and also to engage people in conversations instead of talking at them so much.

Creighton: Another challenge we faced is one that the entire Alan Alda Center faces – how to get people interested in, and invested in, the great discoveries that scientists make every day. We practiced with each other and gave each other honest feedback.

For more information on the Tale of Scale project, see http://people.uwm.edu/jcreight/.