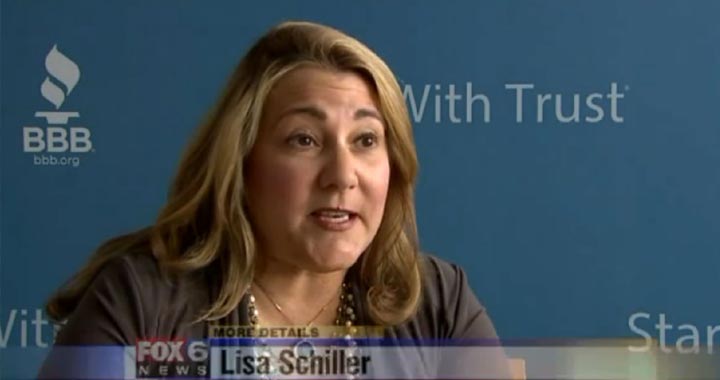 Lisa Schiller is not a woman to do things by half- measures, no matter how long it takes.

Today, she’s the Director of Investigations and Media Relations for Better Business Bureau Wisconsin. Before that, she was an investigative producer for
10 years at WITI-TV/Fox 6. Before that, she was a full-time assistant at Fox 6, a part-time waitress, and a UWM Communication student who was slogging her way through six years of night classes to earn her Bachelor’s degree.

“It was tough,” she said. “I was working two jobs but I stuck with it because I could see the light at the end of the tunnel.”

Schiller grew up in the Milwaukee area. She started a job with the Better Business Bureau after graduating high school and took classes at the Milwaukee Area Technical College before she decided that she wanted a degree and a Communication major. She entered UWM in 1995 and attended evening classes Mondays through Thursdays. While she was in school, she left the BBB and was hired at the WITI television station as an assistant on top of her waitressing job. It was a busy time, but a good one.

“I had great professors in the Communication Department. I had a couple who were so encouraging and interesting,” Schiller said. “It made you want to learn. It made you feel like you could go out and use this degree, that it was a really worthwhile degree – which I still feel it is.”

Schiller’s classes came in handy even before she graduated. Within two years of being hired at Fox 6, she was promoted to Investigative Consumer Producer for the Contact 6 segment of WITI broadcasts. She was responsible for investigating scams, shady business practices, and other forms of consumer fraud, and then shooting and writing the stories you would see on the TV news that night. Over her 10 years at the station, she investigated numerous complaints and helped countless people who had been scammed, but one report in particular stands out.

“One of the pieces I did was a hidden camera investigation on a plumbing company that we had gotten calls about from a lot of senior citizens, saying the company was over-charging. … We worked with NARI, the home improvement agency, and they sent out an expert to make two minor problems with my toilet. They would have cost $1.50 for the part,” Schiller recalled. “I called the plumbing company out, and sure enough, they never really took a look at my toilet. They made me an offer – ’We can fix your toilet for about $2,000.’ We ended up exposing the way this company did business.”

Schiller won a First Place Investigative Award with both the Wisconsin Broadcasting Association and the American Press in Wisconsin for her efforts on that particular piece. Two years later, she and some of the other staff members at WITI won an Emmy for their work on product testing.

The skills she learned in her Communication classes were vital in her career as a broadcaster, she said. She had honed her public speaking in the classroom, as well as her abilities to make strong arguments, stay organized, and pay close attention to detail.

After 10 years in television, Schiller left work to spend more time with her daughter. At the same time, she went back to UWM for another Bachelor’s degree – this time with a major in Criminal Justice in the Helen Bader School of Social Welfare. She graduated in December of 2014. Her next job married both degrees and her love of consumer advocacy. Schiller was hired at the Better Business Bureau again, this time as an Investigator looking into claims people made against particular businesses. After about a year, she was promoted and given an additional job in media relations.

“I do my investigations, I write press releases, but I also deal with the media – newspaper, radio, and TV,” Schiller said. “I understand from a media standpoint what it takes (to produce a story). I make sure that I’m available or we’re available for interviews. I try to go the extra mile for the reporters.”

Schiller credits her job successes to her supportive family. Though she enjoys her work, she said it’s helping others that truly makes her job worthwhile.

“When I started working at the BBB, it was just such an eye-opener. … I thought, look at all the consumers who would call and have questions about mailings they’d received, and phone calls they had gotten, and offers and sweepstakes. When you see these people and hear their stories, it breaks your heart. You want to do whatever you can to try to help,” Schiller said. “I love it. It’s so gratifying. We’ve seen a lot of success.”

CommunicationWhere did your degree take you?