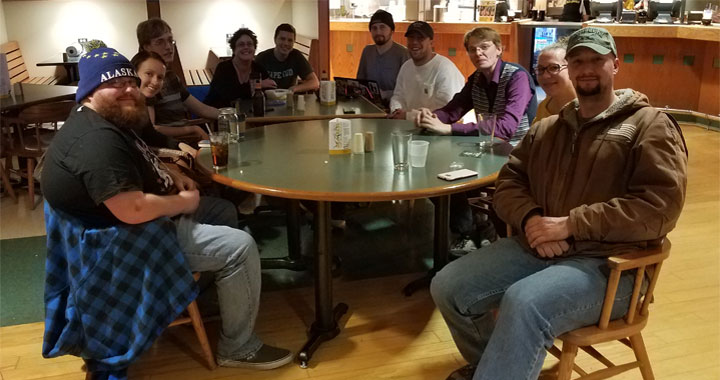 Students gather in the UWM Gasthaus to attend the Russian Language Table. Photo by Sarah Vickery.

Tuesdays over lunch, students gather to converse about anime over Japanese tea. On Thursdays, another group meets to learn songs in Spanish. On Friday afternoon in the UWM Gasthaus, there is a table of students having a lively discussion on how  modern-day Russia views Stalin.

They’re meeting at Language Tables, informal gatherings where students studying almost any of UWM’s language offerings – up to and including American Sign Language, Latin, and Anishinaabemowin (the Ojibwe language) – can meet to practice their vocabulary and conversation.

“Unlike in the classroom, students who go to the Language Tables aren’t so worried about making mistakes. They’re not afraid it’s going to affect their grade. This is optional, outside of class,” explains Allison Libbey, the Spanish Language Coordinator who oversees the Spanish Language Tables. “It’s student-driven for students who are interested in learning more, bettering their skills, getting ready for study abroad or for using the language in a more professional setting.”

The value of a table 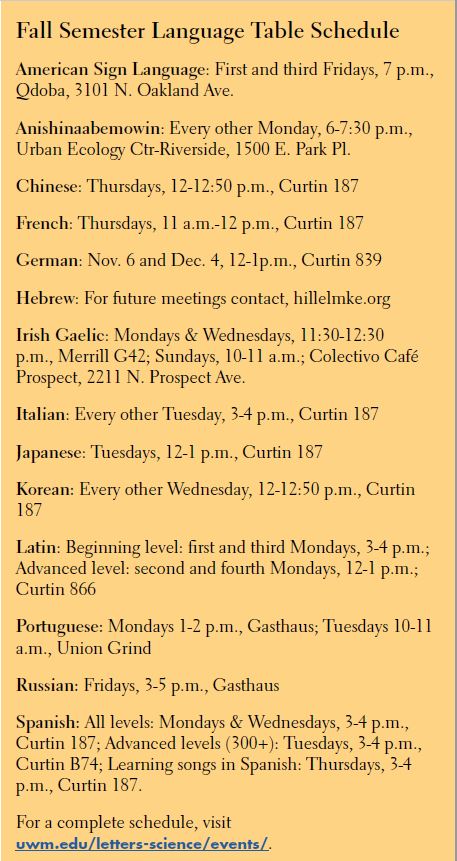 There are 14 languages that offer Tables. Each have their own schedule and way of running things, but Tables typically allow students to drive conversation, both in English and in the foreign language. Topics range from classes they like, to questions about other cultures to, yes, Stalin.

Though Tables are not structured lessons, they still have an impact back in the classroom.

“Every semester, at least a handful of my own students go to the Language Tables. What I see is not necessarily their precision, but their confidence (improving),” Libbey said. “When they’re speaking, you can tell that they’re comfortable and they’re confident and not afraid to make mistakes because they’ve gotten past that barrier a long time ago just by going to speak.”

And, added Yuko Wert, a senior lecturer who runs the Japanese Language Table, the gathering allows students to imagine the possibilities if they continue learning their language.

“They see the vision. They see senior people who study abroad and come back and present about their experiences,” Wert said. “They think, I want to get to that level. I think that helps with retention. They want to keep learning.”

For some, said Russian senior lecturer Meghan Murphy-Lee, the Language Tables have become a means to practice their native tongues or to keep homesickness at bay.

“We try to bring in interested native speakers from the community who want to talk about their home country and practice their language with other people,” she said. “We have a few senior auditors who come to practice their Russian. We have another who grew up speaking Russian and has lived in the United States for many years, and he comes just for the community.”

Language Tables have also become a home-away-from-home for international students, she added. They enjoy visiting with students who speak their language and are curious about their culture.

“The whole point is about community,” Libbey added. “Students in different classes can get to know one another. We have students who drop by who are native speakers from Colombia or Costa Rica who just come to see this Spanish conversation group. They spend the whole time teaching students about their home culture and they love it so they come back.”

Though Language Tables are great for helping students work on their skills and fostering a sense of community, at their core, they’re just fun.

“Somebody’s grandma showed up once. That was cool. A couple years ago, a bunch of us took the train down to Chicago to see a Soviet art exhibit about propaganda,” Kostya Stratman recalled. He’s the tutor who facilitates the Russian Language Table each week. Kostya is his Russian name; many students taking Russian language
classes choose regional names to make their classes more enjoyable.

He and a bevy of other students are gathered around a table in the Gasthaus, talking about their classes and challenging the newest speakers with words like vzglyad – which means “perspective” or “view” and contains the most consonants in a one-syllable word in the Russian language.

There’s a tangible sense of camaraderie. Stratman and the other students even have a phrase for it – and unofficial motto of the Russian Language Table: Razgovory, Druzhba, i Napitki! Conversation, Friendship, and Beverages!

Attend any of UWM’s Language Tables, and you might find all three.