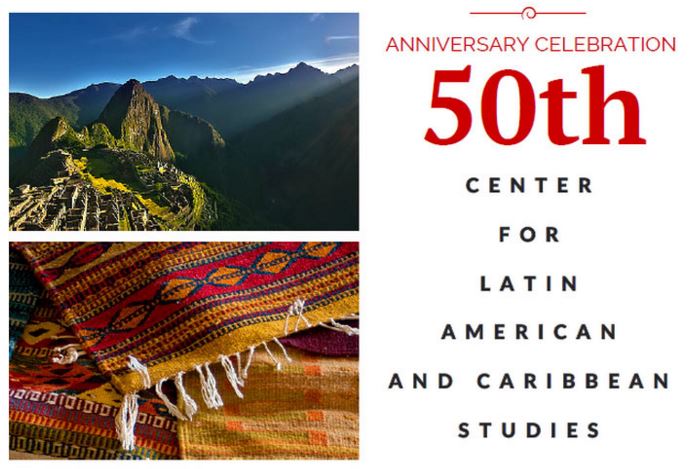 The Center for Latin American and Caribbean Studies is marking half a century of research, teaching, and community engagement this year, culminating in a December celebration featuring history, food, and performances.

CLACS is a Title VI National Resource Center funded to promote Latin American language and area studies on campus and beyond by training teachers throughout the region, hosting community events like the Latin American Film Series, and much more. On campus, the Center brings together faculty from multiple disciplines ranging from political science to urban studies to history. It’s one of just five such centers in the U.S. that has been continuously funded for 50 years or more.

The beginning of CLACS

President John F. Kennedy founded the Peace Corps in 1961, and then-UWM chancellor J. Martin Klotsche jumped on board. At his insistence, UWM established a Peace Corps training center in 1963, a program that included intense language training in Spanish and Portuguese for volunteers who would later work in rural cooperatives in Panama, Colombia, Ecuador and Brazil.

Over six years, the Peace Corps Training Center at UWM trained more than 1,500 Peace Corps volunteers and completed 44 projects. The program was so successful that it gained additional federal grants like the one in 1965 that established a Center for Latin America under the National Defense Education Act.

It’s an origin story that awes CLACS Student Research Fellow Madeleine Jaekels, an International Studies major. She and fellow intern Oscar Hernandez, a Latin American, Caribbean, and U.S. Latin@ Studies (LACUSL) major, have been researching the Center’s history for months to put together displays to be shown at the December celebration.

“I think one of the coolest was finding out the origins as a Peace Corps Center. I was trying to do some archival research (to see) if there was a press release about the opening or anything, and there was … one tiny 200-word article out of the UWM Post. It had a quote from Klotsche, who was the chancellor at the time. That was probably the coolest thing I found,” Jaekels said.

Over the years, CLACS has grown tremendously. The Center was instrumental in adding the LACUSL major to the campus curriculum in 2010, and also houses a certificate program in Latin American and Caribbean Studies. CLACS awards Foreign Language Area Studies Fellowships to support less commonly-taught languages, namely Portuguese. It regularly hosts seminars and training workshops for teachers at all grade-levels who are looking to expand their Latin American knowledge and teaching tools – for example, the Américas Award for Children’s and Young Adult Literature.

“Julie (Kline, Associate Director of CLACS) really saw a need and a gap to recognize the children’s literature that was covering the Americas and Latino content. The children’s literature field didn’t have such a book award. Julie (and CLACS worked with the national Consortium of Latin American Studies Programs to) actually establish the Américas Award collection and it’s become, I think, an extraordinarily important award that helps teachers and librarians connect content on the Americas to their young readers,” said CLACS interim director Natasha Borges Sugiyama.

“There is now in the UWM Libraries Curriculum Collection the 400-plus volume Américas collection. It’s extremely unique. There’s no such collection elsewhere in the country,” Kline added. “We’re doing more programming now with UWM Libraries to do teacher workshops to bring attention to the collection.”

The Latin American Film Series that CLACS hosts annually has also expanded and has a special place in the hearts of many Milwaukeeans. The series started as four fi lms shown in the basement of Enderis Hall and, 38 years later, now brings 1,400 people to the UWM campus each year.

“We are truly a National Resource Center. NRCs exist to educate on campus as well as beyond to encourage global citizens, helping to build language expertise, research content, engaging the public so that people who come to the fi lm series, or any of our public programs, go away with a little more knowledge about another part of the world,” Kline said.

That knowledge is needed now more than ever.

“Studying Latin America is fascinating because there’s always something new to challenge us as scholars and teachers. Whether it’s recent child migration from Central America crossing the U.S. borders, with its implications for human rights, immigration policy, and homeland security, or whether we’re talking about the historic progress being made in renewing ties with Cuba and the opportunities for new engagement with Cuba,” Sugiyama said. “These are really important issues that I think will lend to new areas of research.”

CLACS tomorrow and beyond

Kline hopes that CLACS will find new opportunities to help teachers internationalize their classrooms, not just in areas like social studies or world languages, but in other subject areas as well. Sugiyama would like to see the Center push new lines of interdisciplinary inquiry, further dialogue between the “north and south”, and engage with professional schools. These are subjects they hope to address at a workshop on Dec. 4 about the future of Latin American studies, featuring UWM and regional faculty panelists.

As a LACUSL major, Oscar Hernandez has a unique perspective on the necessity of Latin American and Caribbean Studies, and he hopes that CLACS can gain more visibility in the future – on campus and around the city.

“In terms of economics and politics, Latinos in the U.S. are becoming increasingly important as the demographics change. I think it’s going to be more important,” he said. “I see the tides are changing. We have to prepare society for what it will become.”