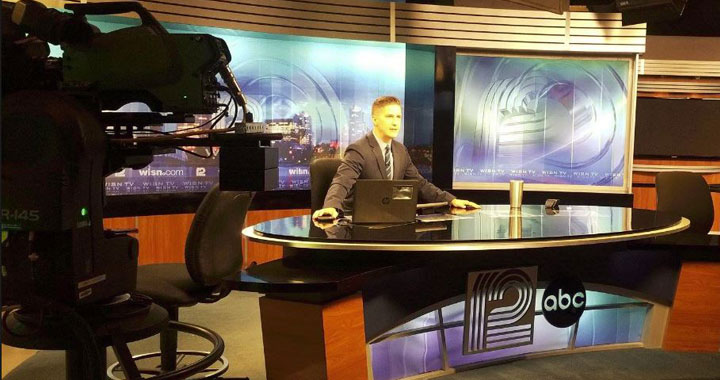 If you tune in to channel 12, you might find Tim Elliott taking you through the day’s news.

Elliott, a reporter for channel WISN 12, has always considered Wisconsin home, but his journey since graduating from UWM in 2007 to the evening news today has been a long one.

Ever since his sophomore year of high school, Elliott knew that he wanted to be involved in journalism in some way.

“I just started to think, as a 14 or 15-year-old, this is when I have to start putting myself out there. I joined the newspaper at Janesville Craig [High School], and I knew then,” said Elliott.

He continued to build on his interests as a Journalism, Advertising, and Media Studies student at UWM. He cited David Allen, Mark Zoromski, and Maryann Lazarski as the three most influential professors he had in college. Elliott is especially complimentary of the award-winning university television production team, Panthervision, which significantly helped his career in television.

“That was like being in a real newsroom,” Elliot said. “[Zoromski] held us to a very high standard. He was tough with his criticism, but that’s what made us better.”

After graduating, Elliott first worked as a producer at a smaller CBS affiliate, WTVY, in Dothan, Alabama, for a few years before becoming a reporter for the same station. After making the switch, he discovered just how valuable his time as a producer was to his new role on the other side of the camera.

“I learned everything there is to know about a newscast, inside and out,” Elliott said. “I think it put me way ahead, because when I switched to reporting, I knew exactly what a producer wanted. I knew how to organize my time better and [how to] have better communication with the producer.”

After his stint in Alabama, he moved to Madison to be a reporter for NBC 15, eventually earning a promotion to co-anchor of the morning news show. Another new opportunity took him to a general assignment reporter job in Louisville, Ky., for a few years. In 2015, he had the opportunity to come back home to Wisconsin as a breaking news anchor for WISN 12 News This Morning and then as the weekend morning news anchor. Recently he moved again, and is now a general assignment reporter for WISN 12. You can usually catch him on the evening news.

“Breaking news anchor was definitely a change, because I was very serious and matter of fact all the time,” Elliott said. “When I was an anchor on the weekends, that was a little more laid back. We liked to have a little fun in the mornings.”

Regardless of what region of the country he’s reporting from, Elliott has found that each job reflects both the challenges and rewards of journalism. Some of the hardest stories he’s had to report on involved families of victims who have been killed, stating that “you get mixed reactions” in those types of situations. One of his more memorable positive stories involved the use of social media to successfully find a kidney donation for a child – a story that held special meaning for Elliott since he went to high school with the child’s parent.

Now that he’s an established journalist in his field, Elliott has better perspective on the current “fake news” phenomenon.

“Politicians come and go, but journalists are here to stay,” said Elliott. “It’s disheartening to hear how prevalent it’s become, but I think most people know that journalists aren’t out here to deceive people on purpose.”

While he has already experienced many different jobs in a variety of locations on his journey home to Wisconsin, he acknowledged the nomadic nature of the business – journalism could take him any number of places in the future.