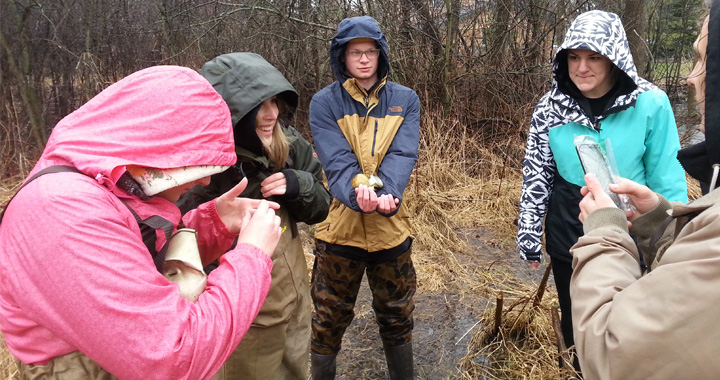 During mating season in April, the ephemeral ponds in Waukesha County are bursting with the sound of amorous wood frogs. Directly to the east in Milwaukee County, silence reigns. There are no frogs left to send up a chorus.

The five seniors were tasked with assisting the Milwaukee County Parks Department with an ongoing project: Reintroduce wood frogs and tiger salamanders to the county’s wetlands. The amphibians have disappeared from Milwaukee County and represent an integral part of the wetland ecosystem.

The county relies on volunteers to report amphibian sightings, so there’s no formal timeline noting when wood frogs and tiger salamanders vanished from the wetlands. Over time, though, urban development and chemical changes to the environment have negatively impacted these highly sensitive animals.

Wood
frogs are gone from Milwaukee County, but this group of Conservation and Environmental Science majors hopes to help
reintroduce them. Photo by Brian Gratwicke.

Gierke, the secretary of UWM’s Conservation Club and herself a “citizen scientist” volunteering to track wildlife species, jumped at the chance to work on the project. “It increases [the county’s] biodiversity,” she explained. “There are complicated interactions between organisms that we don’t fully understand yet. We don’t want to mess them up by taking out one species.”

The reintroduction is in the research phase, Schroyer added. “Our main role was to do the field work,” he said.

“Our job was to find wood frogs and tiger salamanders and another goal was to narrow down which ephemeral ponds would be good for reintroduction.”

For hours at a time over the course of 10 days, the group slogged through Waukesha County Land Conservancy wetlands near Menonomee Falls, Wisc., in order to identify thriving populations of frogs and salamanders. The hope is that when it comes time to reintroduce the animals to Milwaukee County, project managers will have identified several populations to draw upon for transplants.

That involved a lot of wading through cold water and mud in ephemeral ponds, bodies of water that appear in early spring and dry up as the year goes on.

“You go out to those ponds and set those traps out,” Schmitz explained. “The next few days, you come to the pond and check the traps.”

The group lucked out; they began their count during mating season when frogs were so plentiful that Schroyer could – and did – catch them with his hands, leading Slater to dub him “Frank the Frog-Whisperer.” The students also found plenty of egg masses and, at one point, were able to witness some of the eggs hatching. Unfortunately, they didn’t find as many tiger salamanders as they’d hoped, but they did count some blue-spotted salamanders.

“I learned a lot,” Fohl said afterward. “I initially didn’t know anything about ephemeral ponds or how to find a viable population. I didn’t know how to do funnel trapping. … But doing this, I think our project was the most fun out of everyone’s.”

Wetlands, Gierke said, are a good measure of an environment’s health and essential for ground water quality. 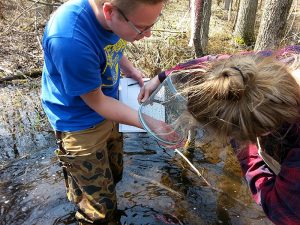 Frank Schroyer and Katie Slater check a trap to see if they’ve caught any frogs or salamanders. Photo courtesy of Frank Schroyer.

“Wetlands slow water down,” she explained. “The soil oftentimes filters out a lot of contaminants from water runoff. It’s good for keeping contaminants out of the lakes. If you pave over that, the contaminants don’t get filtered.”

Animals like wood frogs and tiger salamanders are called “bioindicator species,” meaning that they make good bellwethers to determine the health of the environment. If frogs and salamanders are doing well, their environment probably is too. If they disappear, that could spell trouble for the wetlands. Preserving natural species interaction is essential for the well-being of any ecosystem. Projects like this have the potential to bring a missing balance back to some of the natural areas in Milwaukee County.

And, Schmitz added, it’s always good to inspire others to get involved.

“This could spark other reintroduction projects,” he said. “This is a great way to get people outside.”

You can help Milwaukee County wetlands by getting involved. Visit http://county.milwaukee.gov/CitizenScienceOpportunities to learn more about volunteering.