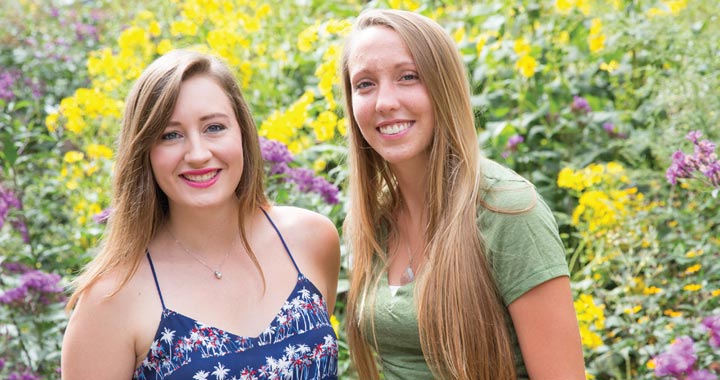 UWM was abuzz this summer – especially on campus roofs.

That’s where Conservation and Environmental Science majors Amanda Pastirik and Meghan Wersel spent much of their break, laying the groundwork for a long-term research project on the presence of pollinators – specifically honeybees and bumblebees – on the university’s green roofs.

“There’s a lot of concern about pollinators. They are suffering from loss of habitat. They are suffering from pesticide use. They’re really important both in natural systems and in agriculture, and people haven’t been paying enough attention to pollinators, so their numbers are declining,” explained Gretchen Meyer, manager of the UWM Field Station. Meyer is running the long-term research project with Mai Phillips, coordinator of the CES program, and recruited Pastirik and Wersel to do the initial data collection.

Green roofs are stretches of plantings on the tops of buildings. They provide several benefits, including capturing and filtering storm water, lowering the overall temperature in cities, and reducing costs for heating and cooling of the building. And, Meyer said, the roofs could provide an urban habitat for pollinators who have few other places to go – but there’s no data to say for certain.

Pastirik and Wersel began collecting data in June. Each week for about two months, they visited two of UWM’s six green roofs, located atop Golda Meir Library and Sandburg Hall. For 10 minutes at a time, they sat and watched a small patch of roof – about a quarter-meter squared – and took an inventory of the bees that flew through the plantings. The library roof is covered with sedum, the most widely-used plant for green roofs, while the Sandburg roof is home to a variety of prairie plantings and vegetables.

The results surprised them.

“The first week we went out was very exciting because we were expecting to be very bored and to sit there for 30 minutes and maybe see (one) bee,” Pastirik said. “Instead, we were seeing 10 bees in our 10-minute observation period. … They’re using the habitat, which is the main thing we wanted to learn.”

The students had expected the spiral garden to be more appealing than the roofs because of its ground level.

“It was almost the opposite,” Wersel said. “The first day that I went up to Sandburg’s roof, I saw at least 15 bees in my quadrant, which was totally unexpected.”

That’s important because bees play an essential role in plant reproduction. Bumblebees are especially crucial; certain plants, like tomatoes, can only reproduce with “buzz pollination,” meaning their pollen is released only at the specific sound frequency generated by a bumblebee’s buzz.

While the results are preliminary and the study won’t be complete for some time, Wersel and Pastirik think their initial findings have positive implications for green roofs, pollinators and Milwaukee.

“The world’s getting more populated. Cities are getting bigger. More buildings are getting built. It’s important to have an urban environment where these bees can go,” Wersel said. “It’s not like (green roofs are) a super-difficult thing to implement, either. I think we have to let people know that it is easy and it does work, and it is a good environment for bees. There’s a lot of benefits to it, and I hope people will see that from our research.”

A Philosophy professor asks, do you want to live forever?