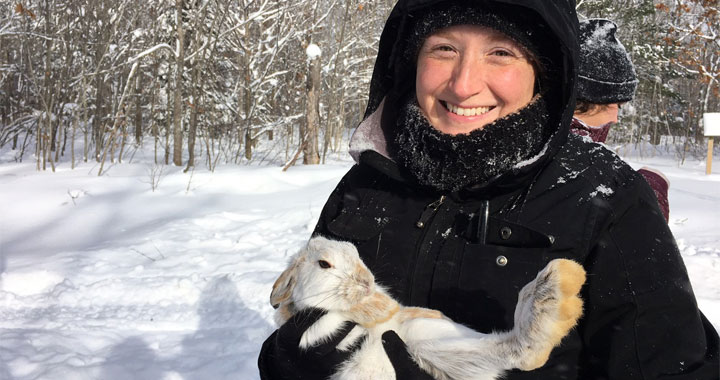 Genelle Uhrig is working toward her Master’s in Biological Sciences under professor Emily Latch, and you can usually find her in the lab sorting through snowshoe hare scat. She’s researching the animals’ population density and genetic diversity in Michigan’s Upper Peninsula by analyzing the genetic material they leave behind in their droppings.

So what exactly are you trying to do with these snowshoe hare droppings?

We’re using fecal pellets to conduct a demographic and genetic study of snowshoe hare. In Michigan and across the southern edge of their range, snowshoe hare populations are declining, largely due to climate change. Snowshoe hare undergo a pelage, or fur, color change from white in the winter to brown in the summer. This pelage change occurs based on day length, which stays consistent from year to year. With the changing climate, snow is coming later in the year and not staying quite as long in the spring, so there’s an environmental mis-match. You have white snowshoe hare on brown ground and they’re more obvious to predators.

Although snowshoe hare are absent from many areas in which they once occurred, no formal demographic study has been done on the remaining populations. How many snowshoe hares are at each site? This will provide much needed data about the status of remaining populations. On the genetic side, we are concerned that genetic variation is being lost in declining populations. As diversity is lost, so is the possibility for the hares to adapt to the changing climate. We want to know if the populations are declining, and if so, are there any genetic consequences due to that decline?

How does their scat come into play?

Snowshoe hare, and really all species, are shedding DNA all the time. As food passes through the digestive system, it grabs epithelial cells and carries them out along with the scat. Those cells are on the outside of each pellet and we either swab the outside or crush the pellet to extract the DNA. Then we can determine unique individuals using genetic techniques and use that information in further analyses.

Though it may not sound appealing to work with animal poop, their pellets are actually kind of cute. They’re just little round, brown, hard balls. Working with scat, especially from organisms that are rare or elusive, is a great way to detect whether they’re in an area or study the animal and population without ever having to handle the animal. Collecting scat allows us to identify individual animals in a population, so we can learn about everything from the health of an individual animal to population demographics to connectivity between populations at a landscape scale.

Why is this research important? 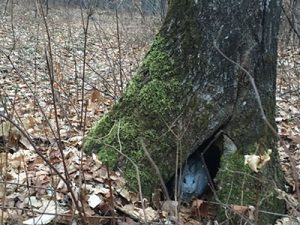 Climate change is here, it’s happening, and we want to better understand the effects of it on wildlife. Snowshoe hare are important because people subsist on them (like the Native American tribes with which we collaborate) and the hares interact with other organisms in the food chain of their ecosystem. If they were gone, then predators that depend on them as food, like the threatened Canada lynx, would be negatively impacted. Any other prey animals that co-exist with hares would also be impacted by increased predation. Conserving snowshoe hare is important for maintaining the balance of the ecosystems they inhabit.

What can the DNA tell you about the hares’ populations?

Just like each individual has unique DNA, populations each have their own unique genetic signatures. We can compare DNA from different populations and if they are genetically similar, individuals might be moving between populations,

exchanging their DNA. So by comparing populations across a landscape, we can better understand how they are connected and how snowshoe hare are moving across the landscape. The converse is true, too. If a population is genetically distinct from others, it might indicate that it is not connected to other populations. Small and isolated populations are in danger of declines and extinction, and so we can identify such populations and take management action to bolster them.

What have their droppings revealed so far?

The story is still unfolding – last year, we collected 269 pellets across seven populations. From those, we identified 55 individual hares (because some scats are from the same animal). Some of our sampling sites had no pellets, and thus maybe do not have any snowshoe hare at all. Some sites had many pellets, but only represented one or a few individual animals. Others revealed many individuals in a population. From these larger populations, we identified some that are well-connected, where snowshoe hare are moving between populations. Other populations do not seem to be connected. We’re collecting pellets at nine more sites this year, so we’ll get a better picture of what’s going on later this year.

Was this what you wanted to be doing when you grew up? I imagine most kids don’t declare a desire to work with scat.

Genetics was not even in my realm until I did a small pilot study with snowshoe hare using genetic techniques as an undergraduate. I had no idea up to that point that scat could provide such a wealth of information. When starting on my academic journey, I knew that I wanted to conserve wild populations and I was drawn to the applied portion of it. Genetics provides a way to look at the finer scale repercussions of species declines and can inform how to best conserve species.

Chemistry PhD alum finds justice is in his DNA