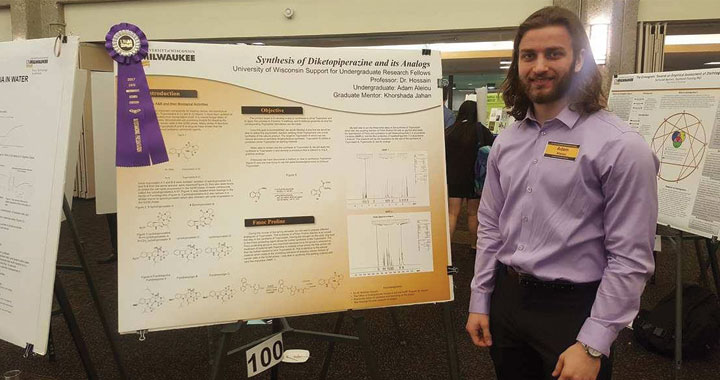 Tryprostatin is a microtubule inhibitor, a drug that inhibits cellular proliferation. That means it’s an effective cancer treatment, since cancer is caused by cells dividing too rapidly without stopping. Unfortunately, it’s a tough drug to make, requiring 11 separate steps in the lab to synthesize it.

Adam Aleiou is hoping to get it down to five.

Aleiou graduated in 2017 with a Biochemistry major and a took a pre-med track. Much of his undergraduate career was spent in Organic Chemistry Professor M. Mahmun Hossain’s lab, where he and several other students worked to synthesize Tryprostatin. They aimed to make it in just five steps, significantly decreasing the time and cost of producing the drug.

Aleiou presented his research at the UWM Undergraduate Research Symposium in April. He successfully completed the first three steps in the five-step process.

“Not only will this help people medically; it has the potential to reduce the cost of the drug, making it more affordable,” Aleiou said. “You’re producing something in less steps, so you’re using less money to produce that compound. You can put that money toward a different research, which I think is pretty important. Finding different routes to treat cancer has many potential benefits.”

Synthesizing a cancer treatment drug is anything but efficient, however.

“A lot of it comes down to chromatography and patience,” Aleiou joked. “You come into the lab and set up a reaction. To set up a reaction takes maybe an hour or two because you have to thoroughly sterilize all the glassware you’re going to be using. After that, you have to precisely calculate how much of each compound you’re going to put into your round-bottom flask. It all goes into one flask where the reaction takes place. I think the longest reaction I ran was 24 hours, but some people in the lab have run reactions for multiple days.”

It took Aleiou almost 30 trials and a whole semester to synthesize the first step, which involved coupling two compounds together. The second step, a deprotection and cyclization of the compound, went more quickly. Aleiou also managed to synthesize the third step, which is another deprotection reaction. A graduate student in Dr. Hossain’s lab is currently working on the fourth step.

“It’s very promising, but all research is uncertain,” Aleiou said. “Anything could prevent it anywhere along the way. If the fourth step doesn’t work, then we have to backtrack and see if we change, say, the first step slightly, how does that affect the fourth step?”

Synthesizing Tryprostatin is only the beginning, however. If and when Dr. Hossain and his students are able to completely reproduce this drug, they also plan to synthesize different variations of it.

“This may lead to development of different treatments of other diseases,” Aleiou said. “The drug and its different variations must still undergo clinical trials before they even think about introducing it to the market.”

But, Aleiou is hopeful. Making a more efficient, cost-effective cancer drug can only benefit cancer patients, and helping people is what drew him to Dr. Hossain’s lab and the pre-med track in the first place.

“I have health issues of my own, so if I can help prevent someone from feeling the way that I do sometimes, that would be fantastic,” he said.

Aleiou is preparing for his MCAT, the medical school entrance exam, and plans to take a gap year after graduation to do volunteer and clinical work.