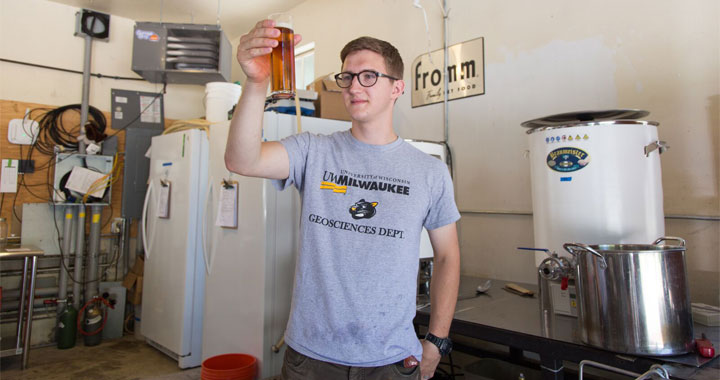 When an internship opportunity arose at Foxtown Brewery, Geosciences major Duncan Glasford was ready to step up to the challenge of honing his skills as a brewmaster.

“I was like ‘Hey, making beer sounds fun. It could be a good job after college.’ So I applied, and I got hired…or I guess I just kept showing up,” said Glasford.

Glasford learned about the internship through his introductory Food and Beverage Studies class with Geosciences professor Barry Cameron. Glasford is a soft-spoken, modest individual. He downplays his extensive responsibilities (despite his title as “intern”), but beer-making is a complicated, scientific process — nothing to scoff at, especially for a young college student.

“My main responsibilities are helping to oversee the brews, measuring grains, measuring hops, mashing, a lot of cleaning, [and] some recipe development,” said Glasford.

While the connection between geoscience and brewing may not be obvious, the two have plenty in common.

“Malt, hops, and most directly, water, are all impacted by geology,” said Glasford. “Often, soil pH and alkalinity are cited as the most influential [factors] on the extraction of organics in brewing.”

The process of making beer is more complex than most imagine. According to Glasford, “it’s all about enzymes and biology.” The process involves developing different recipes based on different types of beer, measuring the respective ingredients, boiling, milling, mixing, and fermenting.

Glasford was especially excited about the opportunity to design his own beer based off of a pre-Prohibition lager recipe that he unearthed in the archives of the UWM library.

“It was based off a Pabst [product] from 1908, so it had all of the ingredients,” said Glasford. “But it was all in German, so I had to find someone to translate. That was really cool.”

Foxtown Brewery has not yet open to the public, which Glasford finds “kind of frustrating,” though he’s relished his internship experience so far. Outside the lack of a clear opening date, though, he’s enjoyed his time at Foxtown.

“It’s super hands on, which I love,” said Glasford. “I can get into the science of it.” Glasford is still considering his options regarding his career path after his expected graduation in December.

“I really want to do more environmental consulting, so this brewery experience is helping with that,” said Glasford, citing how he’s improved his skills in sample-taking and learned how to work with his coworkers as a team. While environmental consulting is his first choice, he’s not opposed to continuing at Foxtown Brewery if he were offered a full-time position.

Regardless of Glasford’s future as a beer-maker, his ongoing internship with Foxtown Brewery has been a success. It’s hard to complain when you’re, as Glasford put it, “working with cool people [and] drinking great beer all the time.”