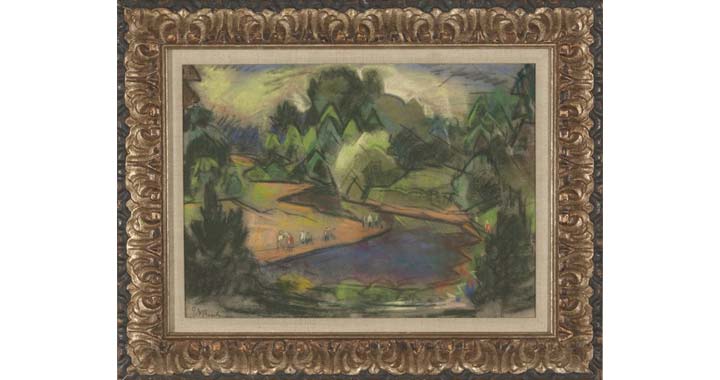 One of the best parts of Nichole Hickey’s job is seeing the biggest names in her textbooks in real life.

Hickey graduated from UWM in 2004 with a BA and a major in Art History. She is now the Manager of Artist Services at the Cultural Council of Palm Beach County, supporting local artists by hosting exhibitions of their work, directing them to much-needed studio space, and offering her own knowledge and expertise from her time in the art world.

Some of the stand-out moments in her career have come when those artists are some of the very names she studied when she was doing her coursework at UWM. She recalls riding a moped with Dennis Oppenheim and meeting up with James Rosenquist and Robert Rauschenberg during an art festival.

“They’re pivotal figures in 20th-century art,” Hickey said. “I love seeing pieces that you’ve studied on the page in person.”

Hickey got her start in the art world working at the UWM Union Art Gallery. A Kenosha native, Hickey originally started her schooling at UW-Madison with hopes of becoming a surgeon, but changed her focus when she took an art history class and fell in love. She moved to Milwaukee in 2001 and was hired at the Union Art Gallery as a gallery assistant. She worked her way up to gallery manager and eventually became the interim director for a time. She helped to put together and install exhibits, which gave her a taste for that career field.

“Working at the Union Gallery was great. It helped me figure out what I wanted to do – and working in other galleries really helped,” Hickey said.

After graduation, she moved to Florida to work for Eaton Fine Art, a blue-chip gallery that had Hickey travelling all over the world. She was an Assistant Director and Registrar for over six years.

Unfortunately, Eaton Fine Art eventually closed, but Hickey found herself once again in the Florida arts community – this time with the Cultural Council of Palm Beach County. She was hired in 2011 and has since mentored and supported hundreds of artists, organized 75 exhibitions, and hung countless pieces of art.

Her most recent exhibition is called “Women: Untitled”, a show featuring female artists with art reacting to how women are portrayed in society.

Putting on an exhibition is a labor of love that starts with an idea. Hickey generates a list of possibilities for exhibitions centered around themes that speak to broad audiences or that may be culturally relevant at the time. Then she has to track down artists, arrange to show their work, physically transport their art, and design the exhibit – as well as throw a large party for the opening night, of course.

“I want to put on exhibitions that are exciting and intriguing and bring in more patrons or possible donors,” Hickey said. “It’s the best part of my job, physically handling the art. It’s like Christmas for me.”

It was a challenge to go from the international art world of Eaton’s Fine Art to the hyper-local art world in Palm Beach, but Hickey has made friends with talented artists who are making a name for themselves on a world-wide scale. One sculptor, Alexander Krivosheiw, is a friend of Hickey’s and was recently commissioned by the International Olympic Committee to create sculptures for visiting heads of state.

Her favorite part of the job, though, is watching artists light up seeing their work on the walls and introducing art patrons to moving pieces that can evoke a strong emotional response. The knowledge she gained at UWM was integral to finding her way to her career, she said.

“The background information helps in thinking about the artwork, but what really helped me was living in the art studios (at UWM), watching bronze pours and seeing print-making,” Hickey said. “Get outside and go to studios and classes and figure out how art is actually made.”