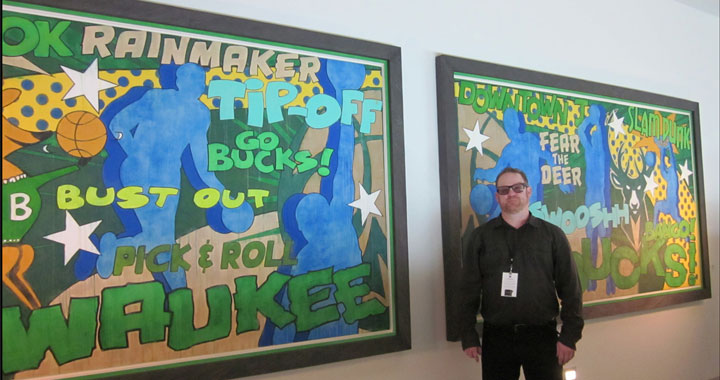 UWM Art History alumnus Eric Oates stands in front of his paintings hanging on the wall of the Fiserv Forum, the home of the Milwaukee Bucks basketball team. Photo courtesy of Eric Oates.

The Fiserv Forum is the new home of the Milwaukee Bucks basketball team, a budding concert venue, and now, an art gallery.

“It’s essentially an art gallery that they put together. You can walk in a complete circle on the luxury suite level and see the art created by these artists from Wisconsin and outside the state,” said Eric Oates, a UWM art history alumnus. He is one of the 32 artists chosen to grace the walls of the brand-new Milwaukee Bucks arena.

Oates is from Wisconsin Rapids and a two-time graduate of UWM – once in 1994 for his bachelor’s and again in 1998 for his Master’s. He initially enrolled hoping to major in architecture, but he soon discovered he was more interested in Art History.

“[Art History] really seemed romantic,” he said with a laugh. “What the [artists] went through and the challenges they faced at those points in history are such interesting stories. It’s almost like if you watch ‘Behind the Music’ for a rock band.”

Oates’ love began long before college. His parents enrolled him in painting classes at age 9 with local artist Susan Nelson Van Sleet, where he took to art like a brush takes to canvas. Later in college, as Oates was studying the greats, “I said, ‘I’m going to do this myself.’ I went to the art supply store and got what I needed, came up with the ideas of what I wanted to do, and went ahead and did it.”

These days, Oates works a day job in the IT field and shows his work in the Sadler Gallery in Milwaukee’s Third Ward on the side. He calls his work pop-expressionism – an almost comic book-like style of painting influenced by artists like Andy Warhol, Roy Lichtenstein, and Sigmar Polke.

“I start by putting a fairly clear image on the canvas – things like Agent Scully from ‘The X-Files,’ Catwoman from the ’60s Batman television show, Wonder Woman played by Linda Carter – and get it on in black and white,” Oates explained. “Then the color is the expressionism part. I put that on in a wash and try and get it to simulate a distressed look so that the color is invoking the feelings and the thoughts and emotions within that. One part is very crisp and clear and then one part is more emotional and all over the place.”

His work for the Milwaukee Bucks is true to form. Primarily done in blues and greens, the two paintings on public display feature silhouettes of basketball players shooting and dribbling down the court, the Milwaukee Bucks logo, basketballs, and bright colors and bold lines. Interspersed on the canvas are phrases made famous by longtime and beloved bucks announcer Eddie Doucette, like “Rainmaker” and “Downtown J” written in lettering that is part-graffiti, part-comic book, and all Oates.

“The words were what they were attracted to the most. One of the submissions I chose was a Catwoman painting. She’s standing confident and there’s an explosion in the background, and it says ‘Ba-Boom!” in these large letters behind her. They wanted to go with that,” Oates said. “They wanted some of the colorful Bucks phrasing from the past incorporated into this.”

Oates submitted a portfolio to the consulting group Sports and the Arts, which acted as the go-between for the artists and the Milwaukee Bucks management. Though the call for entries drew 1,200 submissions, Oates never doubted he’d earn a space on the Fiserv Forum walls. His confidence was well-placed; in addition to the two paintings on the luxury suite level, Oates was also commissioned for a piece that now hangs in the Milwaukee Bucks’ executive office.

It’s been exciting to have his work on display for masses of basketball fans, but Oates was also delighted to learn something new during his painting process.

“In looking at the Bucks logos and getting ready to paint those, I realized that the antlers form a basketball. I suppose people pick up on it, but it wasn’t until I was laying it out that I saw it.”

Researcher illuminates the man who shaped going to the movies