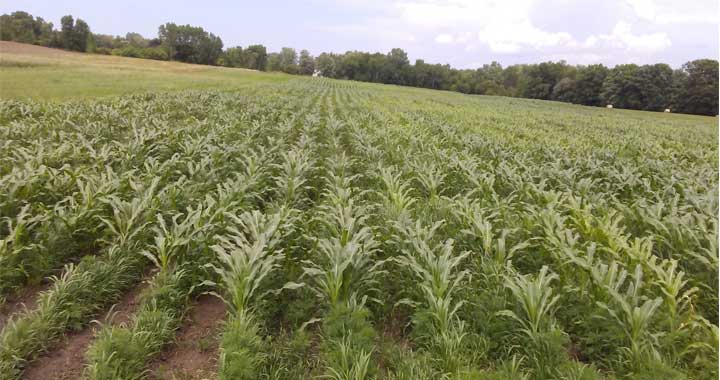 The story goes that in the beginning, the world was covered in darkness and water, but above the world dwelled the sky people. Sky Woman was pregnant and craved the roots of the celestial tree that grew in the sky. She dug beneath the tree to get to the roots and dug so far that she created a hole and fell to our world below. The animals of the world below helped her when she fell; Turtle came up from the water and provided a place for her to land. Sky Woman asked the animals for help in retrieving the dirt that lay at the bottom of the water so she could plant the seeds – corn, tobacco, and strawberry – she had managed to grab from the celestial tree before she fell.

“To us, the corn is sacred because it comes from another world,” said James Flores after he recounted the Oneida creation story. “It’s been a staple crop to us, this white corn specifically.”

Flores is a member of the Oneida Nation and an American Indian Studies major at UWM. He’s the first member of his family to attend college, but he spent this summer off-campus, connecting with his heritage on the Tsyunhehkwa Farm on Oneida Nation lands just outside of Green Bay, Wis. 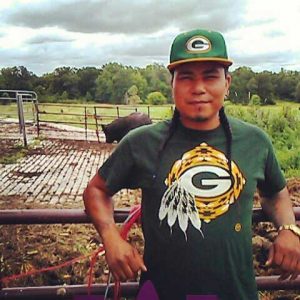 American Indian Studies major James Flores is a member of the Oneida Nation and spent his summer farming and studying culturally important crops.

“The focus of my undergrad research is traditional Native American foods and medicinal plants. So I was researching white corn and bergamot,” Flores said. “My research was really focused on the agricultural with the emphasis on the cultural component of agriculture.”

From the beginning of June to the end of July, Flores worked the farm with other volunteers and tribal members. He grew up on the south side of Milwaukee, so farming was an entirely new experience and he had to “earn his stripes” by collecting eggs, planting corn, and dodging an obstreperous bull in between rounding up cattle.

The farm combines traditional cultural techniques with modern agricultural practices. Flores would hand-strip the kernels from the cob and braid corn stalks and hang them to dry them out. It was much faster and easier to use modern equipment to strip the kernels and jet dry them, he added.

The white corn grown on the farm isn’t just important from a cultural standpoint. All of the produce grown is fed back into the Oneida community. There is a cannery on the reservation where the corn is processed to make flour and corn bread. Tomatoes, squash, beans, and other vegetables are processed at the cannery to make organic salsa that is sold to retail stores.

People on the reservation are encouraged to get involved; volunteers can come and use the cannery to make fresh food for themselves or to help package it. Flores found a deeper appreciation for his own culture doing just that.

“Walking away from this, I’ve learned so much,” he said. “I feel that it’s important to keep our traditions and to show that we are educated and culturally competent. That’s something that is important to preserve and keep going for future generations as well.”

Flores is in the process of formatting his research into the agricultural and cultural components of white corn and other plants. He’ll present his research in one of UWM’s Native American Ethnic Botany courses and bring in some of the white corn he’s grown himself. Later this fall, Flores will begin another internship at the Milwaukee Public Museum in the Native American exhibit.

“I’m really thankful to have this opportunity to take these classes at UWM. It shows the academic diversity that UWM has to offer,” Flores said. “We just started being able to fund our tribal members to go to college. When I speak to a lot of elders, they didn’t have the opportunity because their life was different. … Being educated and Native American in today’s world is not only going to help our family and community members, but also the country as a whole.”