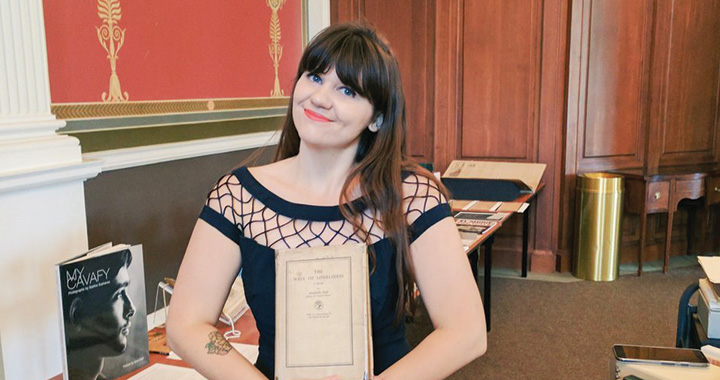 The Library of Congress is the largest library in the world with almost 900 miles of shelving and more than 33 million books in 460 different languages.

Working there has been Meg Metcalf’s dream job ever since she was 17 and working the reference desk at a Border’s Bookstore near her home in southeastern Wisconsin. When the time came, she began looking at colleges that had a strong Library and Information Science program that would still allow her to take interdisciplinary classes.

“I think Women’s Studies and Library Studies go together so well,” Metcalf said. “I’ve always been a feminist … and Women’s Studies is interdisciplinary. You can do so much with it.” 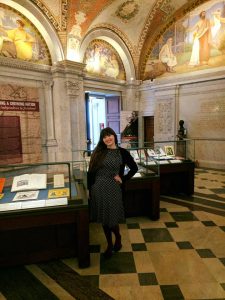 “They had just lost their Women’s History specialist, so having a Women’s studies degree put me ahead of the pack,” Metcalf said.

Officially, Metcalf is a reference librarian in the Main Reading Room and the Library’s Women’s, Gender, and LGBTQ+ Studies Specialist and Recommending Officer. It’s a long title to match the long list of her job duties – but she takes pleasure in each one.

She’s not only responsible for assisting researchers and acquiring new materials for her section, but Metcalf is also tasked with creating displays and highlighting the pieces of the Library’s Collection that deal with her area of expertise. On any given day she might be arranging for a writer to give a presentation at the Library, or she might be giving a lecture on early feminist periodicals. This year she helped plan the Library’s display to recognize Pride month in June and also hosted an LGBTQ History workshop. In January, she was elected chair of the LC-GLOBE, the Library of Congress staff group for LGBTQ+ employees and allies.

Her favorite exhibit that she has worked on, though, brought women’s history to life in an extraordinary way.

“I was asked to put together for a congressional event a display of Rosie the Riveter and working women of World War II,” Metcalf said. “They did an Honor Flight. All of these remaining Rosie the Riveters, women who worked in war production, came in. … A lot of them were in wheelchairs. They were getting their picture taken and all coming up to my display and talking about it, saying ‘I remember this, and I remember that!’ That was an early exhibit of mine, and it was pretty special.”

The job isn’t without its frustrations. The federal government tends to move at one pace – slowly – so it can take some time for Metcalf to make changes to her department or get new programs approved. There’s also the added challenge of learning about all the materials in her section. There are thousands of them, and after two years on the job, Metcalf is still discovering new books, ephemera, and other media tucked in the stacks. She also establishes new collections, and she worked this past year to create a zine collection at the Library. Metcalf did an exhibit on LGBTQIA+ Zines when she worked as an intern at the UWM Libraries, which was inspired by her time with the Queer Zine Archive Project in Milwaukee.

But, she added, exploring the collection is a pleasure. It’s exactly what she’s wanted to do ever since working behind the Border’s Bookstore counter.

“I think about that all the time. What if young Meg knew that I work in the Library of Congress? She would be so excited,” Metcalf said with a laugh. “I wanted a library job, but I wanted it to be feminist in form or relating to women in some way, because that’s really my passion. This is like magic.”