L&S / All News / Alum staying ahead of weather

Alum staying ahead of weather 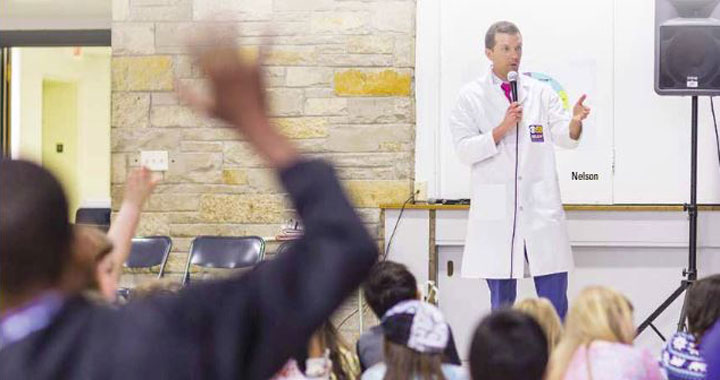 Chris Nelson remembers how the sky above his mobile home in Denmark, Wisconsin – a small town just southeast of Green Bay – turned ominously dark on July 5, 1994. A thunderstorm had just passed when Nelson, not quite a fifth-grader, saw the funnel-shaped cloud form about a mile away in Cooperstown.

But he wasn’t scared or worried when the tornado appeared. Instead, he was enthralled by the chance to witness the force of nature in person.

“I was the kind of kid who enjoyed the Weather Channel more than cartoons,” says Nelson, a 2013 UWM graduate with a major in Atmospheric Science. “I read the TV weather crawl before I even entered grade school and was always taking pictures of clouds, hail and rain with my disposable camera.”

It’s no surprise that today, Nelson is the morning meteorologist for Milwaukee’s CBS 58 TV station. He regularly shares his weather wisdom, especially about tornadoes, with children at elementary schools in the Milwaukee area.

Nelson – along with CBS 58’s chief meteorologist, Drew Burgoyne – spent the 2017-18 school year delivering “Tornado Ready” presentations to more than 40 schoolwide assemblies. They use video of severe weather, along with other techniques, to help deliver important safety information.

Between assemblies, Nelson’s 70 classroom visits and the CBS 58 Weather Days events with the Milwaukee Brewers, they’ve reached an estimated 20,000 kids.

Nelson began turning his childhood fascination with weather into a career when he transferred to UWM prior to his sophomore year. There, he found a mentor in Paul Roebber, distinguished professor of mathematical science and founder of renowned forecasting service Innovative Weather.

Roebber encouraged Nelson to intern with WTMJ 4 TV’s chief meteorologist (and local broadcast legend) John Malan. He did so for two years, then landed meteorology jobs in Las Vegas and Wausau. In 2017, CBS 58 came calling, and he happily returned to Milwaukee to continue his dream job.

Today, he’s energized not only by the school visits, but also the wide range of weather he deals with in Milwaukee, thanks to its four distinct seasons and the influence of Lake Michigan. “If you ever want a challenge for weather,” Nelson says, “come to Milwaukee.”