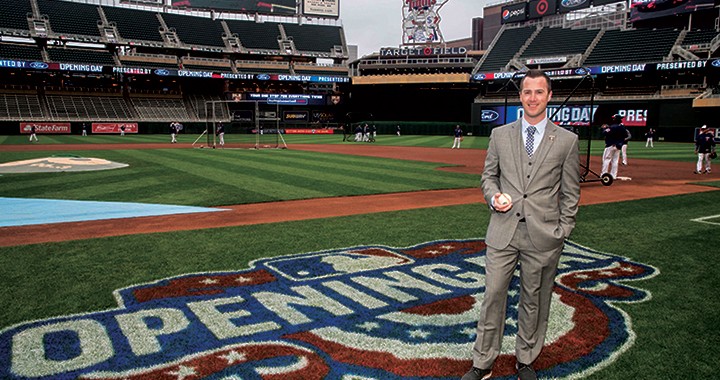 UWM alum Mike Kennedy has a dream job for a baseball-loving writer who grew up in Minnesota.

“Not many people get to say that they grew up rooting for a team their whole life and then get to work for them,” said Kennedy, the manager of communications and publications for the Minnesota Twins. “I come to a professional baseball field every day for work. That’s pretty sweet.”

He credits his UWM experiences, particularly his December 2008 bachelor’s degree in journalism and media studies, for launching his career in sports communication. After growing up in suburban Minneapolis-St. Paul, he wanted to go someplace different for college. “I came to UWM on a whim,” Kennedy said. “I visited the campus and liked the city, and it’s close enough to drive back home.”

After starting out in criminal justice, he switched to journalism because he was intrigued by the major. He had friends in the program and had worked on the newspaper and yearbook staff in high school.

UWM’s program was just the right size to offer the skills and hands-on experience he wanted. Easy access to the athletic department helped improve his sports coverage skills. He also worked as a sports writer and sports editor for the UWM Post.

He liked the small class sizes in the journalism program. “I’m not a big lecture hall kind of guy,” Kennedy said. “Having those smaller classes of 15 or 20 people really helped me get hands-on experience and develop my skills that prepared me for the workforce.”

He joined the Twins communications staff in 2012 after jobs with other sports teams, including the Colorado Rockies. While his focus is on publications, he’s helped with the overall content for the Twins across a variety of platforms. “With all the social media sites,” Kennedy says, “news is now a 24-7 thing. It doesn’t matter if it’s 3 a.m. or noon. Anything can happen anytime.”

While major league ballplayers are a different kind of co-worker, most are pretty cooperative about working with the communications staff, said Kennedy. A few, such as two-time All Star Michael Cuddyer, who was with the Twins from 2001 to 2011, have become friends, and it’s a personal loss when they leave for another team.

“You get used to seeing people around, and you do build relationships with some of them, so you try to keep in touch.” And given the nature of baseball, former colleagues do return – Cuddyer rejoined the Twins this season as a special assistant.

Kennedy deals with everybody from million-dollar athletes to members of the media to front office staff to fans. “It’s all different types of personalities,” he said. “The challenge is saying the right thing, doing the right thing, helping people get what they need. It’s a service department.”

With blogs and tweets and other social media, sports information is also much more participatory these days. “Obviously, the media have a little more inside access,” said Kennedy, “but everybody has their own voice now. Everybody can have their own opinion.”

Off the field, he enjoys family time with wife Brittany, who works for the Twins in the corporate partnerships department, and their 14-month-old son, Caden, and the family’s yellow lab, Knox. They both play rec league softball in the summers, and can’t wait until Caden starts baseball. “I can’t wait to watch his love for the game develop,” said Kennedy.

When he has time, he added, he likes brewing beer and enjoying and analyzing movies. “That’s something I learned from a lot of my film studies electives at UWM.”

Kennedy, who played baseball growing up, also likes the pace, strategy and unpredictability of baseball. “It’s a long season. You can’t just win five and go to the World Series. You have to be a well-rounded team so much of the time.” And, he added, “you can be bad one year and good the next.”

Spring is the time of year when every baseball team has a shot at a winning season — and maybe a postseason appearance. Said Kennedy:

“It’s a high optimism point in the year, no matter how you did last year.”