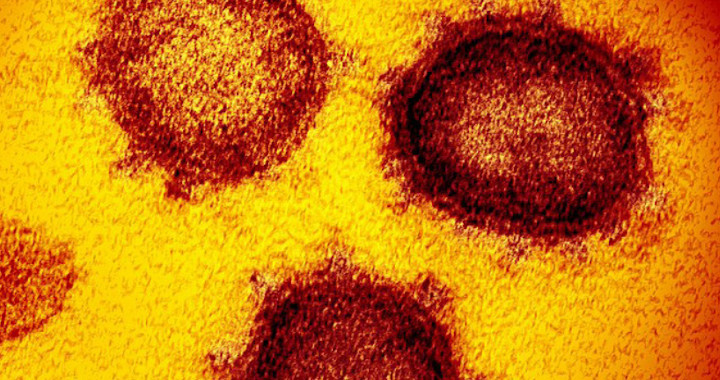 As of May 1, there are over 3 million cases of COVID-19 diagnosed worldwide, with more than 1 million of those cases located in the United States. The coronavirus pandemic has shut down massive sectors of the world economy and instigated quarantines in nearly every country. It’s a big feat for a microscopic package of chemicals.

That’s really all a virus is, said UWM microbiologist Mark McBride – a package of proteins and nucleic acid that lies inert on its own but can hijack a living cell and take it over. “And then it’s off to the races and it starts (replicating),” he said. “In a matter of minutes to hours, you’ll have thousands or tens of thousands of virus particles assembling inside of that cell and then being released and infecting nearby cells.” McBride is a distinguished professor of Biological Sciences at UWM. Though his primary research focus is on bacteria, he knows a thing or two about viruses.

Though the virus that causes COVID-19, called SARSCoV-2, is particularly infectious, it’s a virus that works just like any other.

A virus spreads when a virus particle injects itself into a living cell. Unlike bacteria, which are single-celled organisms that can reproduce on their own, a virus is classified as “non-living” and reproduces itself by taking over a living cell – “Like a pirate,” McBride said – and using that cell’s organelles to replicate its own genome.

Some virus genomes contain DNA, just like humans, plants, and animals, but others, including coronavirus, have genomes composed entirely of ribonucleic acid, or RNA. Unlike DNA, which codes all of an organism’s genetic information, RNA contains instructions for creating proteins. Once the virus has made its RNA to replicate its proteins, it starts to copy its genome over and over, using the living cell like its own factory.

Some viruses then “lyse” the cell, or burst through the cell to escape and infect other cells, thereby killing it. But others, including coronavirus, make a gentle exit, stealing a piece of the cell’s membrane on its way out to form a lipid coating around itself, like an envelope of fat. It leaves the cell intact so it can continue making more virus particles. “There are plenty of viruses like that,” McBride said. “HIV and influenza are good examples. They can release not just thousands of viruses; they can release hundreds of
thousands, or millions of viruses before the cell dies. It’s a strategy that works for the virus, and not necessarily so well for you.”

Most people are familiar with several classes of viruses. People line up for the flu shot each year to protect against the ever-evolving strains of the influenza virus, and bemoan cold sores from the herpes virus. If you’ve ever had a cold, you’ve probably played host to a rhinovirus. But after rhinoviruses, coronaviruses are probably the second-most common cause of the common cold, McBride said.

“Of course, there are some coronaviruses that are much nastier,” he added. “All the ones that we know of that have this nastier trait jumped recently from animals. Closely-related viruses to the ones that infect humans – the SARS virus from more than a decade ago and the current pandemic virus (SARS-CoV-2) – are recognizably similar to viruses that are typically confined to wild animals like bats, for example.” Illnesses that jump from animals to people are called zoonotic diseases, and they generally occur because a virus evolves enough to spread to a different species of host. Because viruses are constantly reproducing, there’s always a chance that they’ll make a mistake, or a mutation, when they’re replicating their genome. If that mutation helps the virus survive, it evolves into a new strain.

Flu viruses and rhinoviruses, for example, have genomes that allow them to mutate rapidly. But coronaviruses, including the one that causes COVID-19, stand out. Coronaviruses are unusual among viruses with RNA genomes because they contain a “proofreading” feature that corrects mistakes during replication. McBride said that this might mean that coronavirus is a more “stable” virus, which could give scientists a better chance at developing drugs or vaccines that target the illness.

Searching for a treatment

Enter David Frick, a UWM professor of Chemistry and Biochemistry. He’s a virologist who has devoted most of his research to creating anti-viral drugs. Right now, Frick and his team are searching for a compound that might work to treat COVID-19.

Anti-viral drugs are tricky to make because they target a specific structural or genetic aspect of the virus to be effective. Unlike antibiotics, which usually work by attacking the unique features of bacterial cells, anti-virals have the potential to harm the host’s regular cells, since viral replication relies so much on using a cell’s existing structure.

“Typically, viruses like this will only have four or five non-structural proteins (proteins that do not make up the virus’ protective outer layer) that are needed for the replication, so it’s pretty hard to develop anti-viral drugs. But the coronavirus has at least 16 different non-structural proteins, all of which could be potential anti-viral drug targets,” Frick said.

He and his team are looking at one target in particular: A SARS-CoV-2 protein that binds a compound called ADP ribose – possibly to remove ADP ribose from cellular proteins. Pathogens often add or remove ADP-ribose from human proteins to cause disease. “This gives us a way to try to find an antiviral so we can find something that binds in place of ADP ribose, and that would disrupt the coronavirus’ biological activity,” Frick said.

Think of the virus like a puzzle. ADP ribose is the correct piece that fits with the virus, but if Frick and his team can find a different piece of the same shape, perhaps one that fits even better than the original piece, they can slot it into the puzzle and disrupt the final picture.

The research began as an undergraduate student project. In January, as reports of coronavirus were filtering in from China, biochemistry majors Garrett Breit, Hayden Aristizabal, and Matt
McCarty helped Frick examine its RNA sequence, clone several SARS-CoV-2 proteins, and purify them in the lab. Today, the project has morphed into a hunt for an anti-viral drug, and Frick and his team have submitted a paper on their work for peer-review, a preview of which is available now through bioRxiv (pronounced BioArchive) .

After isolating the protein, Frick worked with chemistry professor Nicholas Silvaggi, who, along with chemistry graduate student Nemanja Vuksanovic, mapped the 3D structure of the protein so that the crew had a visual representation showing where ADP ribose might bind. “My lab has thousands and thousands of compounds, a few hundred of which we know are antiviral agents. Raj Virdi, another chemistry graduate student, is in the lab working to see if any of those known drugs bind to this ADP-ribose-binding protein,” Frick said. “When we do find one, we’ll go back and do another structure with Dr. Silvaggi. “What we’re hoping to find is something that binds more tightly than ADP ribose. Then we would enlist the help of a chemist to design a drug from that.”

A second line of inquiry

But that’s just one of a two-pronged attack. Frick has spent his career studying a protein called helicase, an enzyme that “unzips” duplex DNA or RNA complexes to allow genetic codes to be read. Interestingly, he noted, the helicase is the only protein in SARS-CoV-2 that is genetically identical to one from another strain of coronavirus: SARS, which struck in China in 2002. So,
any drugs targeting the helicase could be used to squash future pandemics, Frick said.

The helicase is much more difficult to study on a biochemical level, so for now, he’s relying on aid from UWM distinguished professor of chemistry and biochemistry Wilfred Tysoe. Robert Bavisotto and Nick Hooper, graduate students in Dr. Tysoe’s lab, are using computer models of the virus’ helicase crystal structure to visualize and simulate how certain compounds might bind to the helicase protein.

“Based on Robert and Nick’s data, we think that several compounds that we made about six or seven years ago (to target related helicases) can bind to the SARS-CoV-2 helicase structure,” Frick said. If it works, that compound may disrupt the virus’ ability to replicate itself. The Frick, Silvaggi, and Tysoe labs are just a few of the multitudes of scientists working not only in Milwaukee but throughout the world to study COVID-19 and find a treatment or a vaccine. Until a successful treatment is found, though, McBride says to keep washing your hands – the lipid envelope surrounding a coronavirus particle can be destroyed by soap – and wear a mask.

“Some viruses, like coronavirus and influenza, are primarily respiratory transfer: Coughing, sneezing, talking, breathing,” McBride said. “When you breathe, you breathe out aerosols. When you cough or sneeze, you send out bigger droplets that will carry more virus. Probably the biggest reason to wear the masks is to prevent you from infecting someone else.”

Mapping the Connections Among Indigenous People