A friendship turns to internship and job at Usman La’Aro 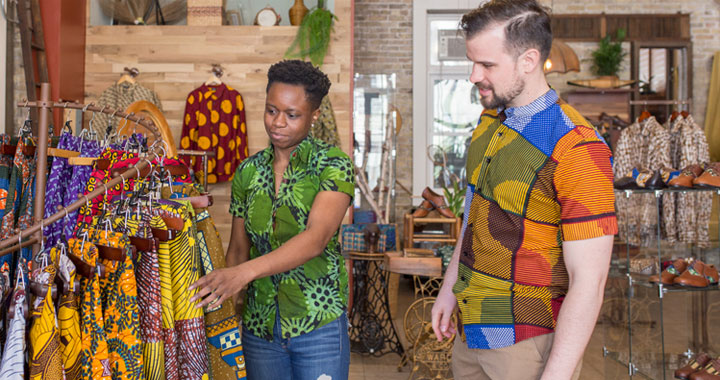 There’s a little slice of Nigeria down on Brady Street.

It’s inside a small shop called Usman La’Aro, where brilliant colors and bold patterns grace the clothing racks. Every dress, shirt, skirt, and other piece of clothing is handmade and imported from Lagos, Nigeria.

Behind the front counter sits UWM alum Simbi La’Aro, whose family owns the business. At her side is her intern-turned coworker and best friend, Andrew Roznowski. Together,  they’re trying to change the way Milwaukee sees clothing, business owners, and commerce.

“We want to show people different stuff. We want to show African American business owners in a different light,” La’Aro says. “We decided to open our arms to all types of people, to anybody willing to listen and open up their eyes and understand.”

All of La’Aro’s offerings feature fabrics straight out of Lagos, Nigeria. It’s the hometown of La’Aro’s father, for whom the shop is named. La’Aro flies out several times a year to scour marketplaces for new colors and patterns, spending hours at a time looking to find the perfect prints. Several are from the local tribes – patterns unique to the Yoruba or the Igbo tribes, for example.

“Shopping for the fabric is always a rush,” she says. “It’s miles and miles of fabric.”

The clothes themselves are a blend of traditional West African cuts and American styles. La’Aro has button-down shirts hung alongside traditional Nigerian shirts meant to be worn for everything from weddings to casual Fridays.

La’Aro designs the clothes herself, and she also offers custom tailoring, just like how clothes are usually ordered and made in Nigeria.

“It gives you that old feeling of being back home,” La’Aro said.

All of the clothes are available for viewing and ordering on the Usman La’Aro website – thanks to Roznowski.

He and La’Aro have been friends since second grade. They grew up in Green Bay before separately making their way to Milwaukee. La’Aro was enticed to UWM with a scholarship for track. She started school intending to be a nurse, but she switched her major to Political Science halfway through and graduated in 2015.

Roznowski followed her a couple of years later. He worked part time with Americorps in Milwaukee and found that he enjoyed the city. Inspired by his travels through South America, Roznowski majored in Latin American, Caribbean, and U.S. Latin@ Studies and minored in Africology at UWM. He graduated in May.

When La’Aro needed extra help with the business, Roznowski was the obvious choice. She could try out using an intern with a friend she knew and trusted, and Roznowski could gain business skills and acumen.

“Simbi has given me a lot of freedom to find what role I fit best,” Roznowski said. “She’s guiding me and training me in skills I never thought were important.”

Roznowski handles much of the digital work of the business – digital design, social media, and photography for the store’s website, for example. He’s traveled to Nigeria with her to shop for fabrics and, upon graduation, was hired as the director of operations for the boutique.

Working in the shop has been an eye-opening experience for Roznowski.

“Before I started working with Simbi, I almost considered fashion to be frivolous, but today I see it as part of our human makeup,” he said.

That’s why he and La’Aro are gratified to see the warm reception they’ve received since moving to the Brady Street location. The avenue is a popular destination for tourists, so Usman La’Aro has seen an international clientele alongside customers from Milwaukee.

That’s a great thing, La’Aro says. She wants everyone, regardless of their ethnicity or racial background, to feel like they can wear Usman La’Aro clothing with pride without being afraid that they’re being insensitive or appropriating another culture.

“The people who live and breathe this clothing every day, when they see a white person enjoying their clothing style, they’re really excited about that,” she said. “Nigeria has the best designers. Simple as that.”

When data is for the birds