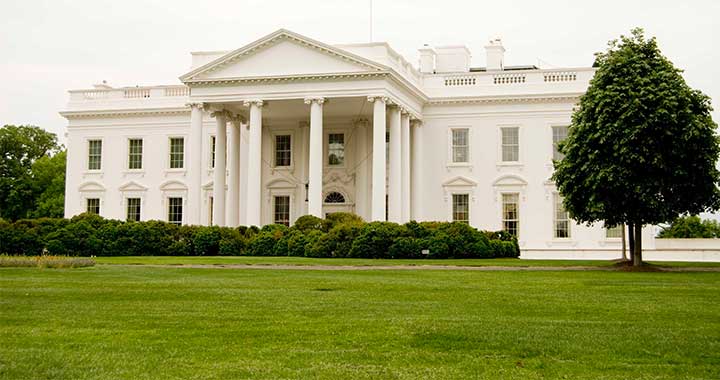 After having worked there for a semester, Molly Dexter and Ashveer Singh can safely say that the White House resembles The West Wing more than it does House of Cards.

The two UWM students recently returned from an internship that placed them in the heart of United States government.

Singh, who is leaning toward an Economics or Political Science major, and Dexter, a Political Science and Women’s and Gender Studies double major, spent the fall semester learning about various aspects of the government as they worked alongside staffers and politicians inside the White House.

Though they are classmates, Singh and Dexter did not know the other was also interning in Washington, D.C. until after the internship started when a mutual acquaintance connected them. Each worked in different offices in the White House, leading to a unique – but rewarding – experience.

Dexter knew she wanted a White House internship ever since she was inspired to major in Political Science after attending the Democratic Women’s Leadership Forum in Washington, D.C. during her freshman year at UWM. Her interest in politics grew as she spent time volunteering, taking classes, and completing an internship with U.S. Senator Tammy Baldwin. She then applied, was accepted, and found herself in the Visitor’s Office under the umbrella of the White House Office of Management and Administration.

“The goal of that office, and also the goal of the President, is to make their (the Obama) White House the most open and accessible in history,” Dexter said. “We mostly coordinated White House tours and large events. A few of the events I got to work on were the Pope State arrival, the National Christmas Tree Lighting, the Fall Garden Tours, and Halloween at the White House.”

As an intern, Dexter was partially responsible for managing White House tours and assisting in the planning and execution of official events.
“The National Christmas Tree Lighting was probably my favorite,” Dexter said. “The whole First Family was there, and the spirit of the event was so warm and memorable.”

Coordinating the White House tours had a humbling effect on Dexter.
“It’s really cool to see how excited and happy people are, especially kids – ‘Are we really in the White House?’ You see it come to life when there are people there,” she said. “If you started to get used to the fact that you were at the White House and you got desensitized to it, people’s reactions would remind you that it’s so special.”

Singh was coaxed into applying for a White House internship by a friend from high school. Singh admires political figures like President Obama and decided he had nothing to lose by applying. He found himself working in the White House Office of Presidential Correspondence.

“The Correspondence Office essentially facilitates the discourse between the President of the United States and the American people,” Singh explained. “I was on the email team. As an email intern, I helped read the incoming emails. The President reads 10 letters every day from the American people … and I was one of the people who screened them.”

Singh can’t reveal the contents of the letters, but he’s thoughtful as he recalls the range of mail. Writers expressed everything from anger to gratitude and sometimes even requested help for personal situations. On occasion, Singh said, the office was able to pass the mail on to others who could help those particular letter-writers.

It wasn’t all business – Singh had time to meet some of Washington’s key political figures, including the First Family, Vice President Joe Biden, and Wisconsin Senator Tammy Baldwin.

“I’m taking an international relations class right now, and a lot of the things Biden talked about were textbook. It was fascinating. He gave a lot of real-world examples from his experience with foreign policy. He’s a truly incredible person,” Singh said.

Both Dexter and Singh flew home with a deeper appreciation and respect for civil servants, no matter their view on the federal government.

“Working for the government is not always the most glamorous thing in the world. You don’t get paid very well, and it’s not necessarily a prestige-driven thing; but I learned that’s not what’s important. The public servants I worked with are true patriots because they work every day in pursuit of something greater than themselves,” Singh said. “That, to me, is inspiring.”

Both Dexter and Singh said that they would like to work in government. Singh thinks he’ll work in the private sector before heading to D.C., and Dexter said she’s interested in working in campaign management. Who knows, she added – one day she might even run for office herself.