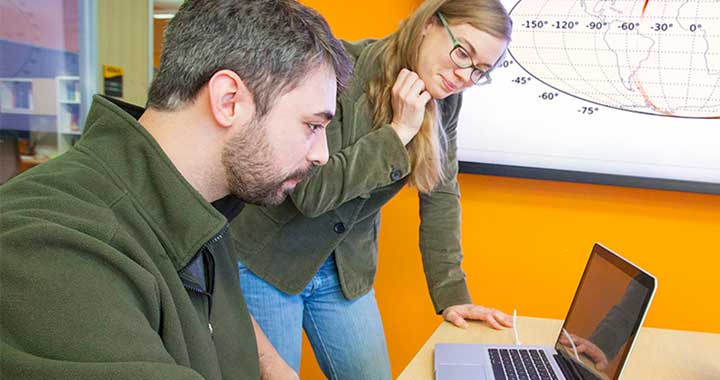 Alex Urban’s space obsession began when, at age 5, his dad introduced him to the original “Stars Wars” movie. Now, as the latest “Star Wars” blockbuster is screened in theatres across the country, Urban is playing a role of his own in the real-life cosmic discovery of the century.

A doctoral student in the Leonard E. Parker Center for Gravitation, Cosmology and Astrophysics at UWM, Urban has been working on the search for gravitational waves for five years when the international scientific effort he was a part of hit the jackpot, finding a wave created by the collision of two black holes a billion years ago.

“I had a hard time thinking of it as something real,” said Urban, who is from Ashtabula, Ohio, a little town about an hour outside of Cleveland. “No matter how much you work on it, until you make a discovery, it’s just an abstract thing in your mind. It wasn’t until I went to Louisiana that I started imagining it.”

The unexpected detection came while he was at one of two detection facilities in the U.S. – called Laser Interferometer Gravitational-Wave Observatories, or LIGO – that had been recently upgraded to boost sensitivity. One is in Louisiana, and the other is in Washington state.

Urban came to UWM specifically to work with Professor Patrick Brady, director of the center. Even without a groundbreaking discovery, Urban’s fellowship with the international LIGO Scientific Collaboration was a prestigious experience for an astrophysicist at the start of his career.

One highlight of his time at LIGO in Louisiana was getting to meet and talk with popular physicist Neil deGrasse Tyson, host of the television series Cosmos.

“That was awesome. He asked me for advice on public outreach for gravitational waves. I thought, ‘You’re Neil deGrasse Tyson! What are you asking me for?’”

But it was his part in the search for the phenomenon that Albert Einstein predicted a century ago that will likely draw the attention of future employers.

In LIGO’s cast of 1,000 scientists, Urban played the role of a data analyst, using specialized computer resources to help pinpoint where a gravitational wave-generating event is located in the sky, allowing them to also gather data on the after effects.

“We do it inside of a minute,” he said. “A likely follow-up to a collision would be detectable X-rays and visible light within about a minute or so afterward. That’s why speed is the name of the game.”

All the information known so far in astronomy came from one source, light. Adding to a toolbox that includes modern telescopes that are pushing boundaries for sensitivity gives scientists a more powerful way to investigate what gravitational waves uncover, said Urban.

This new era is being called “multi-messenger astronomy.”

After graduating at the end of this semester, Urban will look for a research post with the goal of eventually landing a faculty position.

His institution of first choice is Caltech, and he is hopeful. “With this happening in my last semester of grad school, I get to say that I was actually involved. That’s going to be really good for my job applications.”