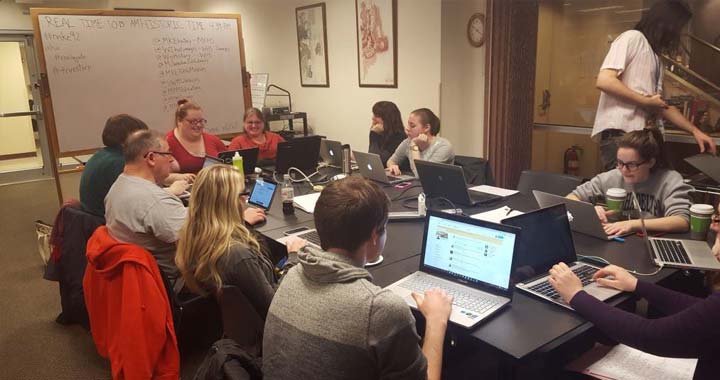 Behind the keyboard sat UWM Public History graduate student Brooke Uhl in a room full of nine other volunteers, eight of them UWM students, at the Milwaukee Public Museum. Each managed a Twitter account portraying a historical figure involved in the fire and live-tweeted over the course of four hours as if they were living through the conflagration. The event highlighted the reopening of the newly renovated Streets of Old Milwaukee Exhibit at the museum on Dec. 11.

The tweeters were recruited by MPM Educator and UWM alumna Jaclyn Kelly (’11, MA History and Certificate in Museum Studies), who approached UWM Professor of History Genevieve G. McBride for help in drumming up excitement for the Streets’ reopening. The exhibit showcases what life was like for Milwaukeeans from the 1890s through World War I.

“The Twitter event was a way to help the public understand the nature of history,” Kelly said. “History is about the experiences of real people.”

In turn, McBride adapted her graduate seminar in the History of the Midwest to include the live-tweeting event, in addition to the normal research papers required.

“I knew that they could do it – and with their previous classes and internships, they could teach me how to do this project. I use many social media platforms but had avoided adding a Twitter account,” McBride said. “Now, I have live-tweeted current events, but using social media to re-enact historical events is a new learning experience for all of us.”

During the live-tweet event, students composed 140-character messages using the hashtag #MKE92, denoting a term that could be searched on Twitter, to follow along with each historical figure as events unfolded during the fire. The students based their tweets on a timeline of the fi re developed by Kelly and her office.

Uhl adopted the persona of James Foley, the fire department chief at the time of the Third Ward fire. Other historical figures included then-Milwaukee Archbishop Frederick Katzer; Otto Falk, head of the state’s National Guard at the time; and Edward P. Bacon, then-Chamber of Commerce President.

Bacon was portrayed by Margaret Spiegel, another graduate student in the Public History program. She was in charge of researching Bacon’s life and his role during the fire. Outside of the knowledge that he became a central figure in the city’s relief efforts for fire victims the morning after the flames had been quenched, little else was known about Bacon. A majority of Spiegel’s tweets were based on inferences she made about his personality.

“I didn’t get a real clear sense of what his personal voice was like. I envisioned him as a kind, sympathetic man based on his involvement with Milwaukee charities,” she said. She and her classmates gleaned their information from research with the Milwaukee County Historical Society and the UWM Library Archives. Uhl in particular swore by the book Beertown Blazes: A Century of Milwaukee Firefighting from UWM’s Special Collections, which detailed the history of Milwaukee firefighting and James Foley.

“He was very instrumental in helping Milwaukee fight fires,” Uhl said. That included hiring more firefighters, purchasing additional fire engines and horses to haul them, and convincing the city to pay for cisterns.

“He did all this because he was in the Chicago Fire in 1871. He also would have known about the Peshtigo Fire. I think he wanted to minimize loss of life,” she explained.

Based on their research, the students drafted about 40 tweets per historical figure. Once the event got going, however, the participants found themselves building on the energy of one another and improvising tweets as inspiration struck. Uhl racked up more than 100 tweets by the end of the event.

“It was so much fun,” Spiegel said. “It was a really good challenge to convey that information in a short space and make it fun and engaging with the hashtags.”

“A lot of younger people don’t come to museums,” Uhl added, “but I think it is one way of using technology to interact with the younger demographic.”

The live-tweet was a social media success. Kelly hopes to attempt other events in the future in partnership with UWM students.