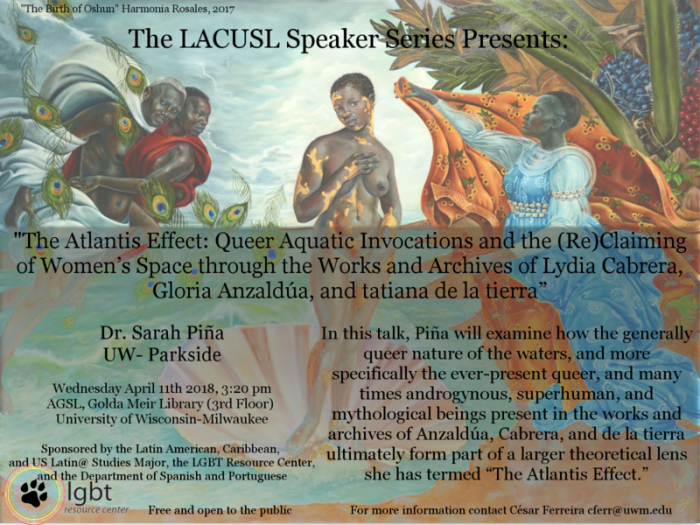 Though writing and living within different times and places, Cuban ethnographer Lydia Cabrera (1901-1991), Chicana scholar and writer Gloria E. Anzaldúa (1942-2004), and Colombian writer tatiana de la tierra (1966-2012) all three US Latinx or Chicanx lesbian writers, consistently invoked water, water imagery, deities or goddesses associated with water, as well as many creatures of bodies of water in their writings, and in their respective archives. In this talk, I will examine how the generally queer nature of the waters, and more specifically the ever-present queer, and many times androgynous, superhuman, and mythological beings present in the works and archives of Anzaldúa, Cabrera, and de la tierra ultimately form part of a larger theoretical lens I have termed “The Atlantis Effect.” Drawing upon Afro-Cuban folklore and religious traditions as well as Chicana indigenous spirituality, I will furthermore explore how water dwellers such as serpents, mermaids, and jicoteas or turtles within the Atlantis Effect ultimately serve as fluid routes of agency and space for each writer, and simultaneously create a patriarchal counterdiscourse patterned by the complex intersections of gender, sexuality, and queer spiritualities in US Latinx and Chicanx Literature.

About the LACUSL Speaker Series:

The LACUSL Speaker Series brings together scholars, professionals, and students working in Latin American, Caribbean, and U.S. Latinx Studies to discuss research, teaching, culture, current events, and other topics of interest to students, faculty, staff, and community members. The Speaker Series is interdisciplinary, and draws on the expertise of faculty and graduate students in the natural sciences, social sciences, humanities, and the professional schools. All events are free and open to the public.

Sponsored by the major in Latin American, Caribbean and U.S. Latin@ Studies, UWM LGBT+ Resource Center, and Department of Spanish and Portuguese