Jessica Gilmore was a “guinea pig,” part of the high school class of 2000 who were warned in kindergarten that they would be the vanguard in a new world of computers. She had her first of many computer classes at age six. Even her teachers, however, could not have imagined how prescient they were.

Gilmore always loved her time on computers, and taught herself all she could. Years later, when she became a SOIS student, earning a bachelor’s degree in Information Science & Technology (IST), she put that education to good use – and found yet another world she could explore and enjoy.

“When I learned at SOIS why we do things in technology, I found it fascinating. I pride myself in my attention to detail and you need that in coding and problem-solving, and pretty much what we do here is problem-solving,” Gilmore said.

A May 2014 graduate, Gilmore hopes to work in the field of mobile software and application development. She has already launched her first mobile application, a project she undertook as a student while working part-time at the “App Brewery,” an academically-inspired cooperative effort between SOIS, University Relations and University Information Technology. Combined with her SOIS coursework – particularly an early class in mobile applications – the App Brewery helped Gilmore recognize her passion.

As a student worker, she had the opportunity to create and launch a new mobile application for the Wisconsin LGBT Chamber of Commerce, now available on Google and iTunes.

“Students in the App Brewery write statements of work, learn project management, software development, the whole process you will need for the real world,” Gilmore said.

Not that Gilmore was unfamiliar with the “real world.” After high school, she studied music education at UWM for a while before earning a cosmetology license and working at her mother’s salon for eight years “working in the family business was one of my mom’s dreams, it turned out,” she said.

Eventually she returned to UWM to major in marketing; an instructor told her that with her experience and interests, SOIS might be a better fit. It didn’t take long for Gilmore to find out he was right.

“Twyla McGhee suggested I attend an open house to learn more. I talked with Chad Zahrt, Laura Myer and Angie Sadowsky. They are the reason I transferred to SOIS as a sophomore,” Gilmore said.

She originally thought she would use her love of design to work on websites from the graphic design side. But she found that she loved software and application development more. 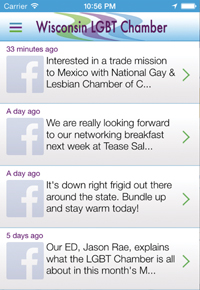 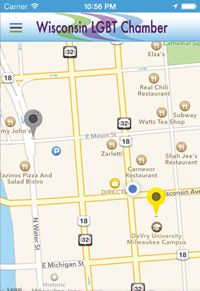 LGBT Chamber App
This app connects users to LGBT owned and allied businesses around Wisconsin. Users can find businesses, learn about upcoming events, and see how they can support a pro-fairness, pro-business community.

“In the IST program, you can go in different directions, depending on your interests and the electives
you take,” Gilmore said. Her work in Associate Professor Tom Walker’s Organization of Knowledge class was an eye-opener.

“When we got into being able to classify and index things, it made so much sense. No matter what field I go into as far as development, I’m going to need that. My education here in SOIS has turned out to be so much larger than I thought it would be.” An important part of that education, Gilmore says, has taken place outside the classroom in the form of counseling and advice on both her coursework and her career.

That assistance helped Gilmore get a job in SOIS as an academic advising assistant for graduate students and as a marketing assistant for Rebecca Hall. As president of the SOIS IST Student Association, Gilmore has returned the favor, helping other students find work within SOIS. “The help I’ve received here, school-wide, has been so important. And because we are such a diverse degree, you get suggestions from all sides and viewpoints.