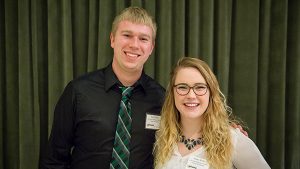 Ashley Matter ’17 is headed for medical school thanks, in part, to the Lawrence Baldassaro Honors College Scholarship. If not for scholarship support, Ashley says she would have had to spend much more time working and much less time on extracurricular activities. Instead, she became president of UWM’s Colleges Against Cancer student organization, which plans the annual Relay for Life event, and she has volunteered as a patient advocate for victims of sexual assault at Waukesha Memorial Hospital.

“Professor Baldassaro’s scholarship allowed me to focus on my extracurricular activities and enabled me to be a strong candidate for medical school,” she says. After she graduates with her degree in biology, Ashley will go to medical school at Kansas City University.

A UWM faculty member for more than three decades and a scholar of Italian literature and Italian American history, Professor Emeritus Baldassaro chaired the Department of French, Italian and Comparative Literature for five years. He was director of the Honors College and served on the executive council of the Dante Society of America, the oldest literary society in America.

Baldassaro says he supports scholarships for honors students because he believes in UWM’s commitment to meeting the needs of its most talented and dedicated students.

“The 13 years I spent as director were the most rewarding time of my 36-year career at UWM. The students’ work ethic, dedication, and achievements were remarkable, but what most impressed me was that, in spite of all they accomplished, they were unfailingly modest,” he says. “These students, who are most likely to make significant contributions to society in the future, deserve to be supported financially.”

Baldassaro has been giving to UWM for the past 22 years, and his scholarship has helped 18 students so far. In addition to Ashley Matter, two other students also received the Baldassaro scholarship during the 2016-17 academic year: Sam Goerke (pictured left), a senior in the School of Information Studies, and Maia Stack, a senior in the Helen Bader School of Social Welfare.