Kayla Brennan wanted to work in healthcare but decided early in her career at UWM that “I wasn’t cut out to be a nurse, with all the needles and blood.”

She applied instead to a new program in the College of Health Sciences to train as a sonographer, using ultrasound to create images of patients’ organs and soft tissues to help doctors make diagnoses. Brennan assumed (mistakenly, it turned out) that ultrasound would be free of blood and needles. 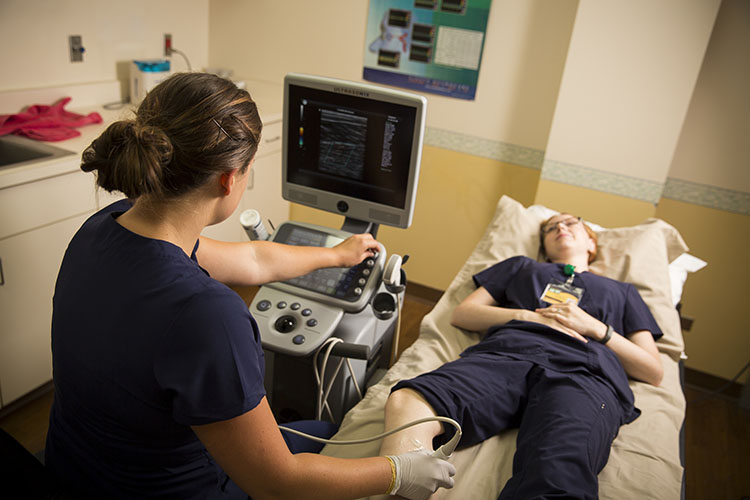 DMS student Jenni Holmes practices using the ultrasound transducer. Ultrasound can be used to examine a range of soft tissues all over the body. (Photo by Derek Rickert)

Her career choice, however, turned out to be a savvy decision. When she graduated in July, Brennan immediately began working full-time at Milwaukee’s Froedtert Hospital. In fact, all four students in the first general/vascular cohort to complete the Diagnostic Medical Sonography (DMS) program received job offers before graduation and began full-time jobs in area hospitals last summer. Entry-level positions start at around $65,000 a year.

“My parents were so excited,” said Danielle Mastrostefano, who works as a perinatal sonographer based at Aurora Sinai Hospital. “I have to pay my own car insurance now.”

The DMS program offers the only university-based sonography degree in the UW System and will help fill a growing need in southeast Wisconsin. Between 2012 and 2022, job openings for diagnostic medical sonographers are expected to increase nationwide by an estimated 46 percent, the U.S. Bureau of Labor Statistics reports.

“Some of that is due to baby boomers leaving the field for retirement, so there’s opportunities to fill those positions,” said Amanda Smith, DMS program director..

But demand for ultrasound is also likely to grow as a result of the Affordable Care Act.

“Ultrasound is generally a very affordable test when compared to other options like an MRI or CT scan,” which involves more expensive equipment, Smith said.

Ultrasound is well known for giving doctors and parents a peek at babies in-utero. But as the technology improves and images continue to grow sharper, ultrasound also can help medical teams diagnose kidney stones, heart disease, and thyroid problems. Sonographers monitor the state of transplanted organs and help guide needles during biopsies. They also work in the operating room, helping surgeons get a better look at brain tumors or other diseased organs.

And that’s why students who imagine that sonography is a blood-free career choice are mistaken. But to her relief, Brennan found that she was so fascinated by the images on screen that the bodily fluids no longer troubled her.

“I actually did just fine with it,” she said.

The DMS program was originally based at Columbia St. Mary’s Hospital in Milwaukee. Traditionally, sonography training has been run by hospitals, which offer certificates to students who complete a combination of classes and clinical training. When budget constraints led Columbia St. Mary’s to explore transferring the sonography training to another institution, faculty at UWM’s College of Health Sciences agreed to incorporate it into a biomedical sciences degree. The first students to study general/vascular sonography at UWM began in fall 2013.

One of the benefits of studying DMS at UWM is that an increasing number of employers want entry-level sonographers with bachelor’s degrees, which teach students to think more broadly and critically, Smith said.

“When our students graduate, we aim for them to be well-rounded, and the different clinical rotations give them advanced experience so they exceed the standard requirements,” she said. Students are also encouraged to take their credentialing exams before graduation, sooner than many sonographers in other programs take them.

Students rave about these clinical experiences, which last about three weeks each.

“They provide so much hands-on learning and patient care that you never, ever get if you’re just in a classroom,” said Kirsten Branstiter, a senior set to begin a rotation at the Froedtert Hospital general radiology lab where she will work side-by-side with experienced ultrasound techs.

“I remember being so excited when we would learn about something in class and then see it at the clinical site,” Brennan recalled. “That combination makes it much easier to piece things together.”

Because students begin clinicals when they start their sonography courses, the first rotation can be especially challenging. Branstiter remembered feeling confused as she looked at ultrasound images her first day.

More than a year later and with months to go before her graduation, she recognizes much of what she sees on screen.

“It’s amazing how quickly you pick it up when you’re in clinical that much,” she said.

The current junior and senior cohorts of UWM’s DMS program include just six students each.

It also makes the students close, senior Kirsten Branstiter added, “Your peers are your counselors, your support people, your friends.”