The CHS Office of Student Affairs is now available remotely. For undergraduate advising appointments and other questions, call 414-229-2758 or visit the CHS advising page.

CHS alum shines as a leader in health care

Nick Blish, who graduated from the College of Health Sciences (CHS) with a bachelor’s degree in Health Care Administration in 2007, has been named the most recent recipient of the Graduate of the Last Decade (GOLD) award.

The GOLD award is granted through the UW-Milwaukee Alumni Association and honors alumni who have achieved significant accomplishments at an early stage of their career. It recognizes professional accomplishment or service to the University by those who have graduated within the last decade. 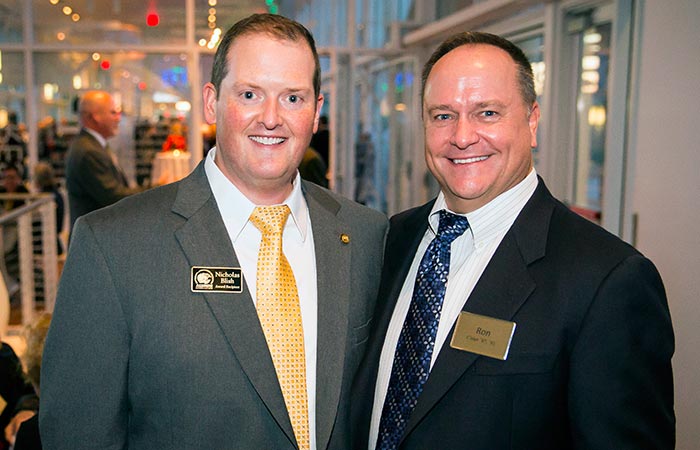 During his time at UWM, Blish served as vice president of the student chapter for the American College of Healthcare Executives (ACHE), Future Healthcare Executives (FHE) and was a member of the College’s student Black and Gold Committee. He also served as a senior recruiter for Froedtert Health and an HR generalist at Community Memorial Hospital in Menomonee Falls.

Since graduation, Blish has been employed as an HR and benefits specialist at Froedtert Health, working closely with the organization’s health, welfare and retirement benefit programs. Blish has been a member of the Board of Directors of the Southeastern Wisconsin Association of Health Care Recruiters (SEWHCR) from 2010-2014, serving as president from 2011-2012. He also holds two HR Certifications, the Professional in Human Resources (PHR) from the HR Certification Institute and the SHRM Certified Professional (SHRM-CP) from the Society for Human Resources Management.

Giving back to the College and community

Blish remains an active contributor to student success by serving in roles with high visibility and influence. A major undertaking was becoming part of a team that re-invigorated the CHS Alumni Chapter in 2011. He currently serves as the senior vice president.

“Nick is the heart and pulse of the chapter. He has done an excellent job of advancing our social media platforms to recruit and re-engage new members,” said Eric Jukkala, CHS class of 2008 and current president of the CHS Alumni Chapter.

Blish was also instrumental in the establishment of the annual CHS Career Fair, which raises money to help support the CHS Alumni Association Student Scholarship. His experience as a recruiter and employment specialist helped to build this signature event for the College, generating new internships, as well as employment for UWM students and alumni.

His industry connections, coupled with his unique ability to foster opportunities for student success, has positioned Blish as a community ambassador for UWM. He has served as the key contact from Froedtert & the Medical College of Wisconsin in offering minority scholarships to CHS students at the annual Awards and Recognition Ceremony and coordinates the Minority Internship Programs for Froedtert.

Truly reflective of the mission of the UWM Alumni Association, Blish remains a champion of students, alumni and programs. Blish’s passion and dedication to the College’s mission, “Where Science Enriches Lives,” has brought credit to the College, as well as to himself in his chosen profession.