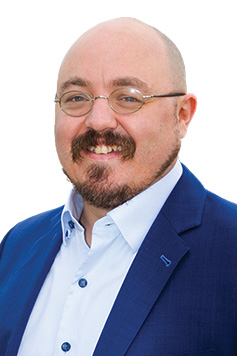 John Schwendel took an extraordinarily long view while researching income inequality in the United States. He explored some 70 years of data, a time frame from 1946-2015, and studied the central range of earners, which offered new insights into how inequality continued to grow throughout the period.

Schwendel, who earned his doctorate in economics in May 2020 under Professor Hamid Mohtadi, sourced geographically precise income data from the Internal Revenue Service. He found that high-earners have steadily pulled ahead of all other earners in the U.S., even during the prosperous post-World War II years of shared economic growth.

Schwendel’s research  also allowed him to divide income earners into smaller groupings than had been available before. Previously published IRS data presented only large brackets of income, without breaking down how incomes were distributed within bands of varying size. “It’s both a major methodological contribution and a contribution in terms of expanding the data set,” says Mohtadi, noting the new and surprising discovery that there was a rise in inequality even in the 1950s.

Schwendel found that middle-class incomes certainly rose from 1946-74, which meshes with the general idea of a strong middle class in the postwar period. “But that’s also when the 90th percentile earners were running away the fastest,” he says. And after 1974, inflation-adjusted wages for the middle class have barely budged while the top group continues to rise. The end result is greater inequality.

From 1946 on, factors such as the GI Bill, unionization and women in the labor force helped boost mid-range incomes. Of particular note was how working women boosted income for two-earner couples, even in the ’40s and ’50s, which helped the 90th percentile of households pull away from lower groups. So did unionization, given the position of skilled workers in the income distribution in the past.