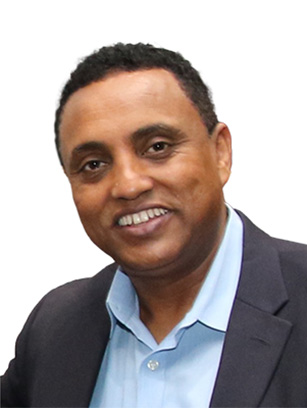 Twenty years ago, Sisay Mersha was a community health nurse practitioner working on the outskirts of Addis Ababa, capital of Ethiopia. There, even though health care was paid for by the government, it was still difficult to get people to go to the hospital if it wasn’t an emergency. “The concept of preventive care is very much unknown,” Mersha says.

Two decades later, Mersha is a doctoral student in the UWM College of Nursing and working as a cardiovascular nurse practitioner at University of Illinois Health in Chicago, where he is observing the same problem, particularly in fellow immigrants from East Africa. He is currently conducting a mixed-method study using survey questions and focus groups to explore this.

Although the health care debate across the United States has generally centered on access to facilities and health insurance, Mersha thinks part of the issue among this African population is a lingering passivity toward seeking health care. “I hear a lot of patients, colleagues and friends from the community saying they have a hard time going to doctors even when they have insurance,” he says. “They only come when they are sick or infected or something affects their daily lives. Even if they’ve lived here for several years, they still haven’t changed.”

Mersha acknowledges that, for immigrants, access remains a huge factor because they often don’t have jobs that provide insurance. Their immigration status might be another barrier to seeking help, as is an unfamiliarity with the system itself.

Mersha’s research is looking at all of these factors to see how they affect health behavior. He collected survey questions from 210 Ethiopian immigrants living in the Chicago area and conducted seven focus groups of faith and community leaders, gleaning their understanding of the challenges.

COVID-19 has exacerbated existing attitudes and behaviors by keeping people inside and providing another reason to delay addressing their pains, aches and ailments, Mersha says. He believes these issues can be addressed by increasing awareness and health care literacy among immigrants.

“We already have access issues whether we are native-born or not,” he says. “Then add the behaviors and beliefs from back home; it complicates the health service issues. We have to engage and integrate our teaching to encompass physical and mental health of the community.”