There are two schools of thought as it concerns the early Martian surface. The first is that, about 3.5 billion years ago, Mars was a cold and icy planet. The second contends that Mars had a more temperate climate, and rivers and lakes flowed over the land.

Originally appeared in the May 2021 L&S In Focus.

So, which theory is correct? The answer lies in an unlikely place: The bottom of a California lake.

That is where UWM graduate student Gayantha R. L. Kodikara (“Kodi”), who is working toward his PhD in geosciences, is examining lake sediments in hopes of better understanding a class of minerals called zeolites. In turn, those zeolites on Earth might give researchers a better understanding of Mars.

Zeolites are a class of minerals that form within a wide variety of rock types, both in marine and nonmarine environments—especially in areas where volcanic ash reacts with different sources of water. Scientists mainly find them in saline-alkaline lakes, in deep sea sediments, hydrothermal environments, and in certain soils and land surfaces on Earth. The general rule is that zeolites need some form of water to form their structure from precursor materials.

Therefore, Kodikara said, if scientists can infer that zeolites form on Earth in certain circumstances—a closed basin lake where volcaniclastic materials are present, for example—then it’s reasonable to deduce that zeolites will form, or did form, under the same circumstances on Mars. 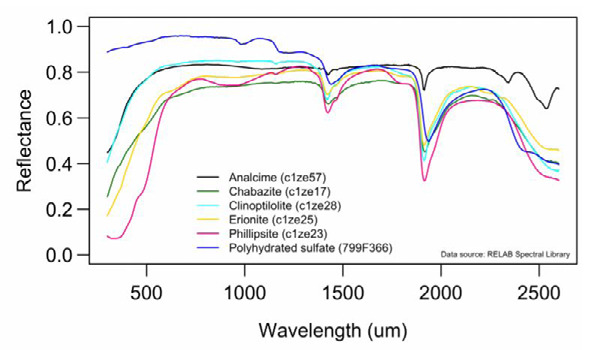 This chart shows the similar wavelengths of various zeolite minerals. The similarities make it hard for orbital remote sensing methods to accurately detect the presence of zeolite minerals on Mars. (Courtesy of Gayantha Kodikara)

In other words, there are plenty of places on the Martian surface where it’s likely that zeolites may have formed.

“We have data mainly from four rovers on Mars: Spirit, Opportunity, Curiosity, and Perseverance. These rovers studied several locations on Mars, but none of them have found these zeolite minerals yet,” Kodikara said. “We have a lot of images from Mars covered by satellites, but from these satellite images only one (zeolite) mineral called analcime has been identified as a possible detection.”

It’s possible that there just aren’t any zeolites, he acknowledged. Perhaps they existed at one point but were removed through a physical or chemical process. Or maybe they were just absent to begin with.

Or, Kodikara said, the zeolites really are there, but our current orbital remote sensing methods can’t detect them.

Answers in a lake bed

To figure it out, he’s using Earth analogs to answer Martian questions. Kodikara and his PhD advisor, geosciences professor Lindsay McHenry, are mainly focusing on Lake Tecopa in California. In 2018 and ’19, the pair spent a few weeks gathering sediment samples from the saline-alkaline paleolake and analyzing them for zeolite minerals. They also assessed the possibility of identifying the zeolites using orbital spectral image data analog to Mars orbital spectral data.

Kodikara is a 2020-21 Distinguished Dissertation Fellow.

“The other thing is, (if) the thickness of the zeolite is very small, they can’t be detected by the remote sensing data. So, it might be there on Mars, but we can’t detect it for these reasons. Even on the Earth, with remote sensing data, it’s difficult to identify, and we know it’s there!”

Common zeolites in paleolake deposits include chabazite, clinoptilolite, erionite, and phillipsite, among others. It might also be that these zeolites are present, but their spectral signatures are so similar to each other and to polyhydrated sulfates, that it’s possible that the non-analcime zeolites can be identified as other minerals such when using orbital remote sensing data. Kodikara is adopting deep learning methods to see if he can distinguish them from each other.

He also collected the bulk mineral assemblages of over 2,360 sediments from previously published work and his studies from paleolake deposits from the U.S., Mexico, Greece, and Tanzania. Using machine learning methods to understand their chemical patterns, Kodikara gained a better understanding of how zeolites form on Earth.

Then, he needed to apply that knowledge to Mars. But there were a few snags. 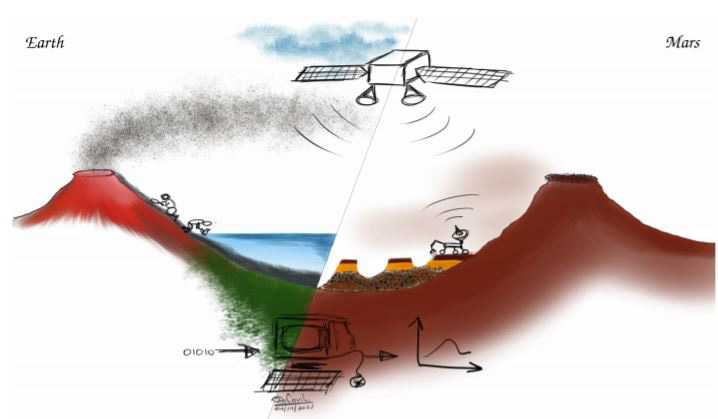 This illustration by Gayantha Kodikara represents how orbital remote sensing by satellites can be used to detect zeolites both on Earth and Mars. Using analog minerals on one planet may help determine what the surface of the other looks like. (Courtesy of Gayantha Kodikara)

“The problem is, Earth and Mars are completely different,” he laughed. “The second thing is, I’m not thinking about today’s Mars. I’m thinking about 3.5 billion-years-ago Mars. The only way to look at this is with thermodynamic modeling and chemical modeling.”

In essence, if scientists assume that Mars used to be warm and wet, they can hazard a guess as to what its atmosphere must have been like, given current evidence and knowledge about the conditions of the solar system billions of years ago. Kodikara used those estimates to establish parameters about what Mars’ oxygen and carbon dioxide contents might have been like, the pressure of the atmosphere, and other factors that would affect zeolite formation.

“From numerical thermodynamic modeling, we found that it is possible to form the same mineral assemblages with the given environmental conditions on Mars, as we see on the Earth,” Kodikara said.

So Kodikara’s work continues. If he and other scientists can use what they know of Earth’s zeolites and how to detect them using orbital remote sensing, they may be able to refine their process of searching for zeolites on Mars.

Kodikara plans to graduate in fall after a summer spent interning with the Lunar and Planetary Institute (LPI). He hopes to find a postdoc position where he can continue researching zeolites and the Martian surface.

He loves his work because it’s exactly what he envisioned as a child. 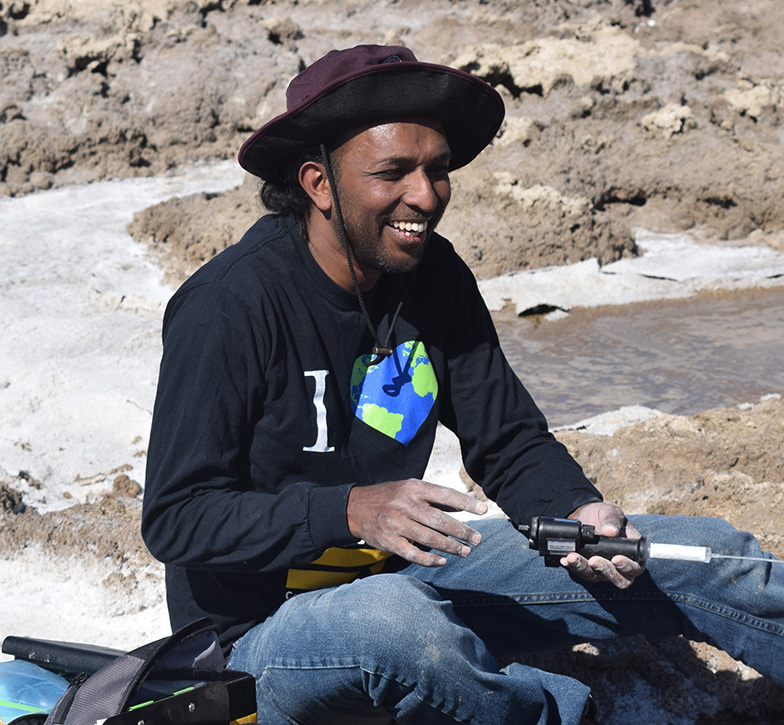 “When I was a small kid, I had a dream to be a planetary scientist. I collected all the newspaper articles about space and planets,” he recalled. Kodikara attended college in his home country, Sri Lanka, before being accepted to a graduate program in the Netherlands (ITC) and India (IIRS) before arriving at UWM as a PhD student.

As a geoscientist, Kodikara firmly believes the theory that Mars used to be a warmer, wet planet. The evidence is in the craters and canyons that carve up the planet’s surface, he argues, and scientists need a better understanding of what Mars used to look like.

“For me, it’s very personal. I am researching Mars to see what happened to Mars,” Kodikara said. “If, billions of years ago, there was a lot of water, what was the reason we lost it? Where did it go? Why did Mars become a dry planet?”

Once again, he’s thinking about analogs—this time from Mars to Earth.

And what, he added, does that mean for Earth?