Among the Milwaukee BizTimes inaugural list of 14 “Notable Women in Engineering ” are three with UWM ties, including CEAS alum Lori Rosenthal (MS, Engineering, 1992).

Rosenthal’s current roles at Milwaukee engineering consulting firm GRAEF include facilities group leader, market team leader (aviation), and senior structural engineer. She began at GRAEF more than 28 years ago as a project manager, according to LinkedIn.

She previously worked as a structural engineer at Milwaukee engineering consulting firm HNTB. 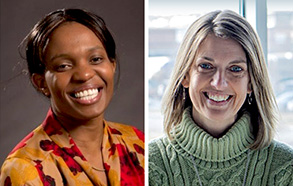 “Lori is not afraid to jump in, roll up her sleeves and solve some really tough problems,” GRAEF president and CEO John Kissinger told BizTimes. “She is ambitious, high-achieving and always on the go.”

“The engineering professionals profiled,” read the BizTimes article, “were nominated by their peers at work and in the community and showcase the diversity of talent in our market. The accomplishments of the individuals profiled here set an example to shape a better future for our region.”

To qualify for the list, nominee requirements included serving in a senior-level role at their firm, holding a leadership position in their industry outside of their own organization, contributing significantly to advancing workplace equality at their workplace or beyond, and acting as a role model or mentor.