Female treehoppers like a good pick-up line as much as the next insect.

But, says Bretta Speck, treehoppers’ discerning taste in mates is not only about how good a signal sounds—treehoppers have rules about what factors into such a signal.

Originally appeared as “Little insects, big brains?” in the October 2020 L&S In Focus.

Speck is a student in UWM’s Biological Sciences PhD program studying combinatorial signal processing in insects. In essence, she’s researching whether treehoppers can process signals with some of the same rules humans use in language.

“If we’re talking about human language, there are certain rules for how we put sounds together. If I said ‘ih’ and ‘nnn,’ those sounds come together to form the syllable ‘in.’ You can start combining from there&‘in’ plus ‘sect’ forms ‘insect’. But ‘sectin’ is not an acceptable word in English. You can go from forming syllables to words, phrases, sentences, and so on,” Speck explained.

“There have been a lot of studies on the rules that birds, whales, primates, and some other mammals use to process the combinations of elements in their songs. It’s been studied in frogs too. I wanted to ask whether insects also use combinatorial rules in communication.”

To test that question, Speck is working with a treehopper species called Enchenopa binotata. These insects, native to Wisconsin, live on nannyberry trees and can spend their entire life on one tree, where they feed on the sap that flows through the smaller branches. Speck describes them as looking like tiny dinosaurs in silhouette&brontosauruses, to be exact.

Those calls aren’t audible; instead, the treehoppers send vibrations up and down the stem of the plant to communicate. Speck said, those vibrations are sound, just sound transmitted through solids, and you can detect them by monitoring the tiny movements of the stems. 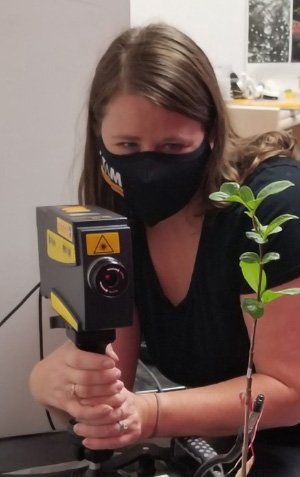 Speck aims a laser vibrometer at a nannyberry tree to detect the vibrations that treehopper insects send through the plant when they perform mating calls. Photo courtesy of Bretta Speck.

“The males’ mating signal is a ‘whine’ followed by pulses. Using a laser vibrometer and an audio program on our computer, we are able to listen to them calling,” Speck explained. “If the female likes what she hears, then she’ll respond back with a signal of her own, a sort of hum. They’ll just go back and forth duetting.”

Sending out a mating call

But, Speck wondered, do the insects actually pay attention to the structure of the signal? To test that, Speck and her team created a vibrational playback stimulus that mimics the ‘whine-pulse’ of the male’s mating call. She placed tiny devices on the stem of a plant to play the vibrations through the stem, just like the insects do, and then placed a female treehopper at the top of the plant. The team then pointed a laser vibrometer at the plant to record the females’ vibrational responses to the playbacks.

“We were listening for whether or not the female would give a positive signal&so whether or not she responded to the male,” Speck said. “If we gave the wrong signal, like the reverse signal, where it was the pulses followed by the whine, she would not respond to that.”

In fact, in some instances, the female treehopper seemed to get frustrated or angry by the wrong signals. She would flap her wings or even try to jump off of the plant.

That seems to be an indication that treehoppers can process the structure of complex signals.

“It’s not stringing sentences together, but it is some evidence that they are able to process ‘This is a right mating call, and this a wrong mating call.’”

And that, she added, means that these insects, and possibly many other species of bugs, are smarter than we humans give them credit for.

Speck’s research will be published in the American Naturalist journal later this month.