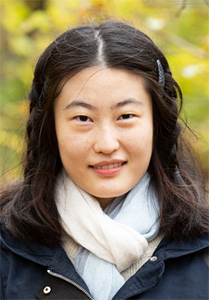 Bats may not have the best public reputation, but they play an important role in the ecosystem. For example, most bats in the United States feed on insects, which means fewer bats would lead to more bugs. And some bat populations are indeed in decline.

Doctoral candidate Xueling Yi uses data science to research bats under the guidance of Emily Latch, a professor of biological sciences. Latch’s lab is devoted to studying animal genetics and evolution to improve conservation and management.

“There are more than 1,400 bat species in the world,” Yi says. “In that lineage, that group, there are so many things that we do not know.”

Among the problems to be solved: the little brown bat’s losing battle against a disease called white-nose syndrome. A fungus interferes with their hibernation cycle, so they wake up a lot during the winter. It’s a life-threatening situation, because the strain to cope eventually becomes too much, and Latch says their population is being decimated.

Studying bats’ history and geographical tendencies can help better understand their susceptibility to disease. Yi’s research focuses on those aspects for the big brown bat, which is less susceptible to white-nose syndrome than its smaller cousin and may be growing in population.

The big brown bat is commonly found from southern Canada to northern South America. Yi has analyzed the species and created genetic, genomic and environmental databases about it.

“Using modeling approaches, you can estimate in which type of environment a bat will be found,” she says. That allows her to predict population spread and allows local authorities to manage public health.

Yi’s work earned her a 2019-20 Northwestern Mutual Data Science Institute scholarship, and it could provide answers that help bats of all types, big and small.