How do you tackle climate change, ease food insecurity, promote biodiversity, and foster a sense of local community, all at the same time?

Originally appeared in the July 2021 L&S In Focus.

Oladokun-Dybowski is the founder of Isa’s Garden Charities, an online seed exchange and non-profit gardening forum that aims to tackle food insecurity in Pinal County, Arizona, and beyond. The group is working to establish a physical garden in Casa Grande, Arizona, where Oladokun-Dybowski lives with his family.

It might seem like a strange endeavor for someone who holds a master’s in anthropology, but Oladokun-Dybowski, who earned his degree from UWM in 2011, says that he finds ways to use his anthropological skills every day.

He sat down to talk about the community garden, community service, and applying his education. 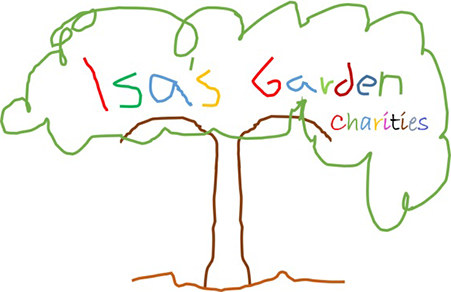 Tell me about Isa’s Garden Charities. How did it begin?

I realized that one in four children go to school hungry in Pinal County, where I am. I thought that that was a travesty. At Arizona State University Dean Michael Crow at our graduation told all of us graduates that we should go back to our community and be a very positive impact on our communities, that really hit home. (Oladokun-Dybowski earned a master’s in social work from ASU in 2017.) I built a Facebook group and started to solicit the strengths of all of the local gardeners in our community to build a collaborative where we could meet up and do seed exchanges. We essentially make an effort to turn black thumbs into green thumbs.

How does teaching people to garden tackle food insecurity?

Learning seed saving, seed harvesting, seed storage, all of that, can help out with people becoming more sustainable outside of the monetary system constraints. We don’t necessarily have to be limited to going to the grocery store. Healthy food stores don’t have to be so expensive. We can undermine that and subvert it by creating these share groups where people are sharing seeds with each other, learning how to grow food. If you teach somebody how to grow their own food, they’re far better off than if we provided handouts.

Now you’re working with officials in your city to establish a physical garden for the whole community to use. How did – pun intended – Isa’s Garden Charities grow from a seed exchange to this project?

It’s just phenomenal. There are over 600 folks in my group. I think you can gain a tight-knit following to practice methods of getting yourself into a better position and increasing your quality life. Gardening is one method.

If we can teach people how to grow their own food in the harshest of climates like the Sonoran Desert, we can do it anywhere. I think it’s important to document it so you can create a model that others can follow throughout the world and reduce climate change and world hunger. That record is in our Isa’s Garden Charities online Facebook group. I focus on trying to reduce food insecurity in my small town, but if you look at it as a microcosm, you might find that this has worldwide potential.

But how do you grow anything in your town? Arizona doesn’t have the most hospitable climate.

Luckily, we have sun here, but we don’t have a whole lot of rain. You can grow anything that you want. We can actually grow anything from bananas, mangoes, various palms, to a lot of other subtropical types of edible fruit trees. Apples, mulberries – a lot of things that will take the full brunt and heat of the sun. That’s what you want to start growing in order to build a microclimate.

You have to think soil and shade first. We have to dump a lot of woodchips down on the hard soil to condition it. You have to grow your shade and build your soil top-down. This mulch-over-compost idea builds that organic horizon over a period of a year or two. You can start to grow your trees out. If they’re deciduous, they’ll start to naturally drop their leaves after a while and you can build this natural system forest effect, where it becomes sustainable and regenerative.

You’ll notice a biodiversity change too. You’ll attract many different kinds of birds to your yard, many kinds of butterflies, which are unfortunately in sharp decline. 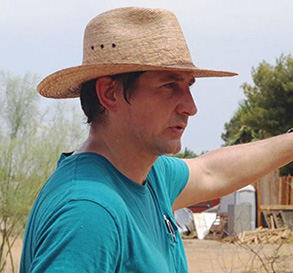 In a 2018 Urban Farm podcast, Oladokun-Dybowski discusses building a community garden from scratch. (Photo from urbanfarm.org)

So you’re tackling environmental concerns in addition to hunger, it seems.

Every time we grow plants, we sequester carbon from the atmosphere. That’s actually a part of photosynthesis. Every single seed that we can plant, we’re already doing good for the climate.

I know profit is what’s driving the farming industry and agriculture. There’s this constant need to have more land to cultivate. But monocropping is so scary. They use heavy machinery, which is already putting farmers in debt, so they have to make up a certain amount money on their crop in order to pay that past debt off. It’s a very difficult situation for farmers to be in. They have to use pesticides constantly, which is a tremendous detriment to our plant life and pollinators.

How do we reverse that mentality? I do it one person at a time. I try to impress it upon everybody who joins my group, and perhaps they’ll turn around and impress a couple of other people. This idea of practicing diffusion – the slow spread of ideas – is hopefully, one day, going to come to fruition.

Practicing ‘diffusion’ sounds like an anthropological idea. How else does your education come in handy? It doesn’t seem like anthropology and gardening would really translate.

It’s so odd! But if you look back at a lot of the anthropology coursework, especially on complex societies, you’ll see, through what we have learned from archaeology, that complex civilizations in the past were already self-sustainable. They knew how to build irrigation pathways and aqueducts that helped sustain cities in the middle of the desert.

I use Pierre Bourdieu’s “practice theory” all of the time. I learned it from (UWM anthropology professor) Kalman Applbaum and others from the UWM faculty. It’s applying misrecognition. People use it all the time, perhaps unknowingly, but it’s economic mechanism that ensures the cooperation of two people.

What’s next for you?

When I married into the Oladokun family, who are from Nigeria, I adopted their last name as my first last name. I embraced their Yoruba culture, and I’m trying to learn the language with the longer-term idea of implementing what I do here with my charitable work in Casa Grande, Arizona. I’d like to develop Isa’s Garden Charities into an International NGO. I’m distributing propagated trees, plants, and seeds, while teaching people propagation methods to benefit the community in three towns where relatives are in Nigeria: Ayete, Ibadan, and Igbo ‘Ora. I have already begun this process with friends who work on the family farm in Igbo ‘Ora by teaching air-layering of moringa trees, which is one of the most nutrient dense profile trees on the planet.