You can’t talk about public health or COVID-19 in Milwaukee without talking about race or racism. Few people know that better than Lilliann Paine—and she’s often the person leading those discussions.

Originally appeared in the October 2020 L&S In Focus.

“By initially focusing on racial inequity, I believe that we can address Milwaukee’s most persistent disparities while developing a permanent shift toward fairer practices and institutions that benefit all,” Paine said.

In March, Milwaukee County issued a public health emergency in response to the COVID-19 pandemic. Because the county does not have a dedicated Health Department, the city of Milwaukee Health Commissioner Jeanette Kowalik was placed in charge of coordinating the county’s response. Paine was at her side, helping to inform citizens about the threat of the virus and how to slow its spread.

But soon, Paine and others in the Health Department noticed a disturbing trend.

“Early in our outbreak response, we detected that the African American community was being impacted the most,” she said. Paine began to craft pointed messaging and awareness campaigns that specifically targeted those most at-risk.

“I frame our public health issues and solutions with a racial equity lens with the goal to de-mystify and educate about the public health system,” Paine said. “It’s important that we acknowledge that systemic and institutional racism in our city has compounded the impact of COVID-19 for African American and Latinx communities. It’s making it more challenging to stop the spread from the start.”

For example, “Milwaukee County was the first jurisdiction to create a (COVID-19) dashboard that was explicit about racial and ethnic data,” Paine noted. “(We were able to) galvanize resources and call for increased outreach to decrease the spread of the coronavirus. We received resources to prevent COVID-19 among African American, Latinx, First Nation and southeast Asian communities.” 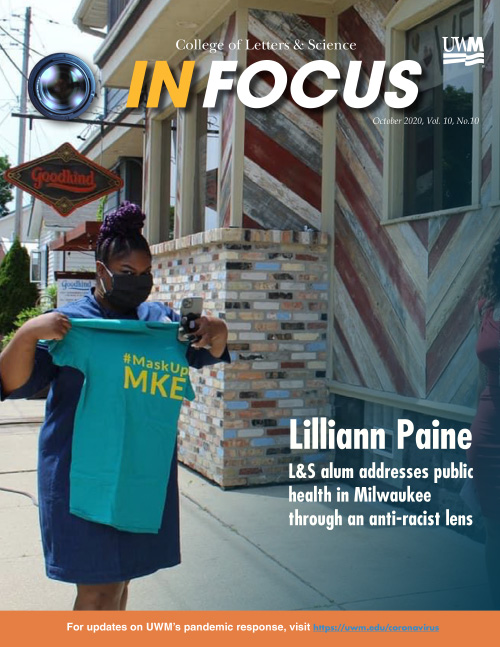 L&S alum Lilliann Paine on the cover of the October 2020 L&S In Focus magazine.

It was actually thanks to Paine’s efforts that Milwaukee declared racism a public health crisis to begin with. Before she began her job with the Health Department, Paine worked as a Health and Well-Being Educator for the Milwaukee County Cooperative Extension, and was the founding member of the Wisconsin Public Health Association (WPHA) Racial Equity Workgroup. Her group was one of the driving forces behind the declaration.

Paine grew up in Milwaukee. As a child with asthma, she spent much of her time in the pediatrician’s office, where her interest in health care and public health began. Initially, Paine had her heart set on being a pediatrician too—but after going a couple of rounds with a college-level organic chemistry class, she decided her talents might lie elsewhere.

Instead, she majored in psychology at UWM, hoping to be an advocate for youth in the health care system, and graduated with her Bachelor’s degree in 2005. She briefly contemplated a career in clinical psychology, but that field was not a correct fit either. Instead, Paine found herself drawn to health on a larger scale.

“Instead of doing one-on-one support, I can change policies that can touch environments,” Paine said. “My primary work is that of implementing strategies that have led to long-term involvement of community institutions, organizations, and individuals (to) ensure healthier outcomes for families.”

After a few years of work, she returned to UWM for a certificate in Public Health. She was working through the requirements when the university announced it would offer a Master’s degree in Public Health. Paine was among the first graduates of that degree program in 2013.

In each job, she’s found herself working with a lot of data—data that tells a story.

“I knew who held the data, and I knew who told the story,” Paine said. “I did my best to give tools to those who were most impacted to help tell the story from their perspective, and if that wasn’t respected or received, I tried to amplify the voices of those who weren’t being heard.”

Paine’s efforts have been appreciated—mostly. Like anyone trying to effect large-scale, institutional changes, she’s received pushback in several jobs where she tried to lead her bosses and coworkers to focus on racial equity.

“Unfortunately, at times, I was expected to be the barometer of racism,” Paine said. “As a result, I felt like there was unspoken fear of conflict, absence of trust, and avoidance of accountability. I was routinely accused of being hostile, aggressive, difficult, or angry, and at times I felt ostracized in that particular work environment.

“Moving forward, I knew that teams must practice mindfulness and empathy when trying to declare something like racism a public health crisis. I think it’s crucial to approach the work of eliminating disparities as learners, and not experts on the experience of our priority populations.”

It’s a tall order, but a challenge that Paine has risen to time and again. Her work has garnered her recognition; in 2016, the Wisconsin Public Health Association presented her with an Excellence in Health Promotion and Disease Prevention award, and she received Presidential Citation Awards from the WPHA in 2019 and 2020. Late this summer, Paine accepted the nomination to become the WPHA board’s President-Elect.

To compound that, Milwaukee Health Commissioner Jeanette Kowalik announced her resignation from her position in August, so Paine will also contend with the loss of her boss and colleague as she moves forward in her job as the Health Department chief of staff.

But so many of those challenges are worth it to make Milwaukee a healthier city for those most impacted by disparity.

“The change I want to see, I may not see it in my lifetime,” she acknowledged. “I have to ground myself with the goal to demand systemic change. I think addressing models of health care and promoting anti-racist models of care help. The changes that I’m seeing and would like to see are around making investments in social determinants of health.”