There has never been a better time to be part of UWM!

There has never been a better time to be part of UWM! 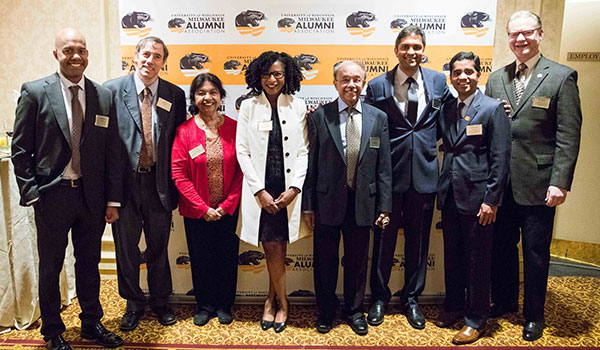 At the 2018 UWM Alumni Association Awards, K. Vairavan was surrounded by some of the friends, colleagues and family members who surprised him with more than $275,000 in donations to the scholarship in his name.

The wave of support—from former students, colleagues, family and friends—came as a surprise to the professor affectionately addressed as K.V. Until then, K. Vairavan, professor emeritus and adjunct professor, electrical engineering and computer science, was quite happy that students were benefitting from a scholarship established in his name at UWM’s College of Engineering & Applied Science.

Vairavan’s family, with support from alumni and other donors, established the scholarship in 2012 as a way to support outstanding undergraduate students majoring in computer science, computer engineering or electrical engineering. The first award was made in 2015 and since then 20 students have received a K. Vairavan Scholarship.

But then came the fall of 2018, when Vairavan received a UWM Honorary Alumni Award from UW-Milwaukee’s Alumni Association. That’s when the professor’s former students, colleagues and family rallied, contributing more than $275,000 in gifts and pledges to the scholarship fund and ensuring that it will support generations of students.

“At the end of the awards ceremony, I learned about the university’s and the college’s efforts to reach out to alumni and colleagues to raise more funds for the scholarship,” says Vairavan. “I was deeply moved by the generosity and appreciation of current colleagues and former students, many who came from different parts of the country to surprise and support me on this special day.”

These new contributions were combined with the balance of the original funds to establish an endowment fund. Endowments are permanent, meaning scholarship awards will now be made indefinitely from income generated by this fund.

Vairavan believes that the scholarship recipients benefit in several ways. The awards can be viewed as marks of distinction, he says. The scholarships release some students from the need to work in nontechnical areas during their studies. And finally, he notes, they can reduce financial debt at graduation.

“My hope is that the scholarships will allow students to focus on their studies—to excel in them and prepare to embark on fulfilling careers,” Vairavan says.

The K. Vairavan Scholarship is one of the named scholarships awarded to engineering and computer science students through the UWM Engineering Excellence Scholarship Program. They help the college attract and retain top students and are offered in addition to scholarships through UWM’s Financial Aid Office.

The endowment fund can continue to grow, which will ensure its value is retained. Contributions can be made by contacting Jean Opitz, College of Engineering & Applied Science development director, at (414) 229-5603, opitz@uwm.edu. Donations also can be made online; designate “Professor K Vairavan Scholarship” in the dropbox.