Thousands have lost jobs due to COVID-19, making it difficult if not impossible for them to pay rent, buy food and stay in school. The Chancellor’s Student Success Fund will provide a wide range of emergency financial assistance, including scholarships to keep students on the path to success. Please consider a gift to help UWM’s students in crisis
Give Now 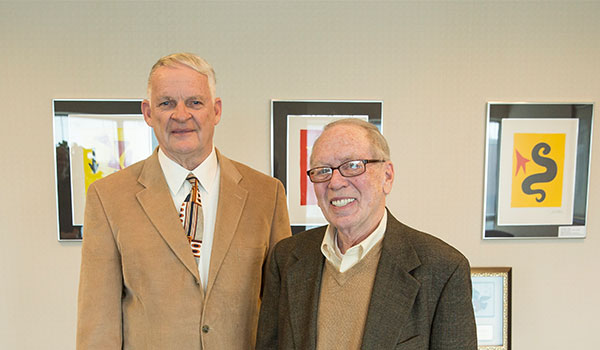 Ed Vander Grinten was a generous alumnus to UWM during his lifetime. Thanks to the provisions Ed made in his will, his legacy will continue at UWM long into the future.

In 2014, Ed established the Edward L. Vander Grinten ’66, ’70 Scholarship Fund to help graduate and undergraduate students who were majoring in accounting with the intention of becoming certified public accountants.

Ed made a cash gift to get the scholarship started during his lifetime, and he added to that – and extended the impact – through a gift in his will. He decided to give UWM his house after he died, so the proceeds from the sale of his home could be used to endow his scholarship fund. This planned gift was realized after Ed died in October of 2017. Because of this generous provision, his scholarship fund will continue to help UWM accounting students in perpetuity.

Ed’s scholarship reflects own career path. After earning his bachelor’s degree in accounting in 1966, Ed served two years in the U.S. Army before returning to UWM for his MBA in 1970. His first position as a CPA was with Arthur Anderson, and he opened his own public accounting practice in 1976.

Throughout his life, Ed remained connected to UWM and the Lubar School’s accounting department.

“I owe my success to the remarkable training I received at UWM,” Ed said in 2014.  “It gives me great satisfaction to think I will help future students manage the rising cost of receiving such a great education.”

So far, Ed’s scholarship has helped four students. This year’s recipient, Aesha Patel ’18, ’19, is pursuing her master’s degree and plans to take her CPA exams beginning in August.

“I am very thankful for this scholarship because it allows me to focus on my end goal and removes a large amount of financial burden,” Aesha said. “I typically work two jobs as a full-time student, and now adding the CPA exam to my responsibility, I could not be more grateful for this generosity.”

From School of Ed to NASA