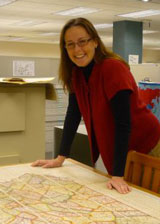 Marcy Bidney has been named Curator of the American Geographical Society Library at the University of Wisconsin-Milwaukee Libraries. She succeeds Christopher Baruth, who retired in 2011 with emeritus status after working at AGS Library for 31 years, including 16 years as Curator.

Bidney has published articles in the Journal of Map and Geography Libraries (“Can Coordinates in Catalog Records Be Useful?”), OCLC Systems and Services (“Creating the Virtual Map Drawer: Bridging the Gap between Spatial Data Infrastructures and Map Libraries”), and other journals, and has delivered numerous presentations at national and international conferences.

Bidney’s professional affiliations include the American Library Association (where she has served as Chair of the Map and Geography Roundtable, 2010-11, and Co-chair of the Government Documents Roundtable, 2008-2010); Cartographic Users Advisory Counsel (Co-chair, 2009-11); International Federation of Library Associations (Government Information and Official Publications Committee, Secretary, 2006-11); and Association of American Geographers.